Krueger is not my usual cuppa,  but the publisher hype and reader reviews hooked me because I am interested in border problems,  both drugs and immigrants.  So,  the outcome was mixed –  I enjoyed the setting,  plot and “themes” but I wasn’t too keen on the protagonist or the writing style.   I’ve only read one of Krueger’s books prior and that was Ordinary Grace which is far more literary and therefore not typical.  I suppose it doesn’t count.  Krueger usually writes books about a detective in northern Minnesota,  Cork O’Connell and that’s what this is –  #16 in the Cork O’Connor series,  except it takes place in southern Arizona. 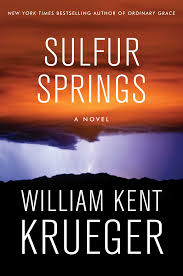 *******
Sulfur Springs
by William Kent Krueger
2017/ 320 pages
read by David Chandler – 11h 5m
rating –   B+ /  crime:  suspense-thriller
(book 16 in the Cork O’Connor series)
*******
Although the opening chapters were great,  it still took me awhile to get interested because the style is so … um … dry?  I don’t know.   Maybe it was the narrator.  Maybe I’m just not used to reading Krueger books or I’m not up to speed for this particular book,  or the narrator didn’t strike me right – don’t know.

Anyway,  Cork and his brand new Native American wife,  Rainy Bisonette, have to go to a place south of Tucson on short notice because Peter,  Rainy’s son from a prior relationship,  phoned and left a message about having murdered someone and being in trouble.   Eeks!   Peter mentioned the name Rodriguez.  Peter Bisonette is a recovering addict who was treated and supposedly working for a very expensive rehab south of Tucson.

When they get to the rehab they find that Peter was fired six months prior and hasn’t been heard from since.  He gets his mail in the small town of Sulfur Springs, but when they investigate there no one seems to know anything about him.

Asking a few questions,  they come across a lot of knowledge about the local issues,  immigration and drug cartels particularly but also a group of bikers,   from several rather shady characters and a few sympathetic ones.

But there are so many forces and sides.  There is a drug cartel working with the killer anarchistic bikers and there are the really struggling immigrants as well as the humanitarians who help them.  There are also government forces of several types plus  a gold prospector or two and a property speculator in town.  The book is slow moving because it’s back and forth over the desert searching for Peter,  back to town,  searching for immigrants,  back to town and over to the desert again searching for the bikers.  And there’s more than that.

On the plus side, Krueger does a great job on the setting and general ambiance of the place.  I’ve been there and I’ve been to northern Minnesota.  I like Minnesota better – southern Arizona is okay to visit.