Posted on December 27, 2017 by beckylindroos

While looking around at Timothy Hallinan’s books  – due to Fields Where They Lay –   I see that one of my favorite authors has another Poke Rafferty book out (and it’s been as of November 7!)     Cool.   Great crime novelist – one of the best on the market today imo.    I’ve followed his Poke Rafferty novels from #1.

The overarching plot of the series is that the fictional protagonist,  Poke Rafferty,  a travel writer who lives in Bangkok,  has adopted a young and very bright street urchin named Miaow.  He also lives with his fiancé,  Rose, an ex-bar dancer whom he married in about book 5.   In Fool’s River Rose is pregnant and Miao is about 14 years old. 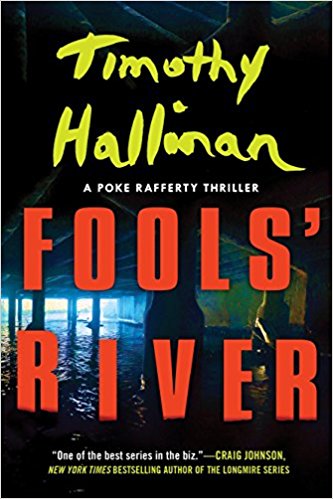 Miaow  attends a good English school where she has a  close friend named Edward Dell.  Now Edward’s father,  Buddy,   is missing.  The man’s main  occupation is womanizing which is what tore the family apart and the scary part is that other men have recently been found dead in the city’s central river.   Not only are they dead with legs encased in plaster,  their credit cards and savings accounts have all been completely used up in recent prior weeks.

Edward has already looked around a bit for his father and he’s scared because Buddy’s accounts are already being drained.  Yes.   Edward lives with Buddy,   but he doesn’t like him very much and understandably,  he really doesn’t want to see him hurt.  Miaow wants to help so Poke gets involved.

Another hugely important character in the book is a young transgender woman  named  which adds that theme and it’s very sweetly done and at the same time it’s gritty ugly.

Meanwhile,  Miaow is playing Eliza in their school version of Pygmalion and the very pregnant Rose goes missing.

This book seems to be a bit grittier than Hallinan’s priors – there is serious and very graphic violence against men, women, and children.