Rest You Merry ~ by Charlotte MacLeod

Posted on December 23, 2017 by beckylindroos

Professor Peter Shandy of Balaclava Agricultural College decorated his campus house in an outrageous manner for the annual Christmas Illumination fundraiser and then he left town.   Unfortunately,  he was forced to return early and thus discovered the dead body of assistant librarian, Jemimah Aimes,  behind a couch in his living room.  It looks like the opinionated Jemimah  was trying to “fix” the gaudy decorations and had an accident,  but there was apparently more to it than that.   Shandy sees the problem right away – there’s a missing marble. 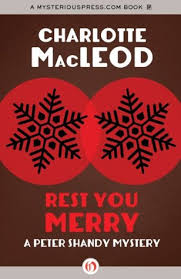 This is a rather cute little campus oriented who-done-it and fun for what it is.   MacLeod develops some  decent characters and uses humorous dialogue.  Can’t give it much of rating but I wasn’t hugely disappointed, either.