What Are You Looking At? ~ by Will Gompertz

Posted on November 30, 2017 by beckylindroos

I’ve got a fair background in art history – about 12 graduate units for teachers via the Getty Program and Fresno State University  –  those were wonderful day-long summer classes filling 2 or 3 weeks for 2 separate years.  Plus I taught teachers in a mentor program so this is just so right up my alley.   I always was more oriented toward the history and formal analysis than the production. 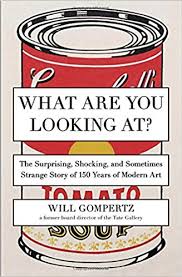 Will Gompertz,  the author,  is the art director of BBC and a writer –  used to be the director of Tate Media.  He’s well respected in the field.

The “Preface” explains the author’s inspiration and background and after that we get a formal “Introduction” which opens with a story – like quite a lot of the narrative.   This one deals with   the public’s (taxpayers) not understanding  a sculpture consisting of a rectangle comprised of 120 bricks laid out on the floor at the Tate.   That’s still a problem – how to comprehend and/or evaluate modern art.   Is it good, bad, meaningful, etc?   What is it about?    And answering this question for the layman  is the general point of the book –  to help the reader/viewer adjust himself to the ideas behind the modern and contemporary art he sees in books and museums.

What is art?  At this point,  it seems that’s really just a question of  “Where a piece fits into the modern art story and why .”    If you understand the historical context you’ve got it – just apply that to the works of a specific movement and why those ideas were explored.

From Chapter 1 where Gompertz describes Duchamp’s “Fountain” (1917) –   a urinal as sculpture – and its effect on the art scene,  and Chapter 2 with the difficulties in the French Salon system,  all the way to Chapter 20 where the new “entrepreneurials” of the 21st century have entered the scene,   the book generally outlines the schools and most important artists of the last 150 or so years.

Over time,  the idea behind the work became more important than the piece of work displaying it.   This is important.

I’ll quit the spiel now and let you read the book-  it’s good – for many levels of reader,  interested layman through professional.

Gompertz’s style is chatty and informal – no dryness here,  but at the same time there’s a LOT of information.  Reading one chapter at a time was about as much as I could take.

3 Responses to What Are You Looking At? ~ by Will Gompertz