Posted on November 28, 2017 by beckylindroos

Amazing book!  I wanted to read slowly to fully savor and digest the material,  but I just couldn’t.  Hour after hour I sat listening via my Mac and reading via the iPad/Kindle.   I broke only to stretch and do something in the kitchen or laundry room.   This is a goodie if you’re at all interested in the Little House on the Prairie series or their author and her daughter (Rose Wilder Lane) as well as the times in the US –  1860s – 1980s and on.

I can only compare it to “Eden’s Outcasts: Louisa and Her Father”  by John Matteson which won the Pulitzer several  years ago,  another really fascinating literary biography I thoroughly enjoyed. 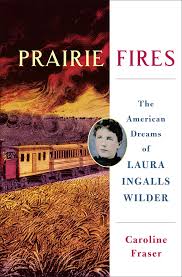 As a kid I read all the Little House on the Prairie books and loved them.  They were like a piece of my own history what with my ancestors settling in Iowa and Wisconsin  in the 1840s and then eastern North Dakota in the 1870s.   It never crossed my mind Wilder’s  books were completely true so I was never terribly disillusioned by the rumors I heard later.  And of course I knew from my grandmother that life had been hard when she was a girl growing up on a North Dakota farm in the late 19th/early 20th centuries.

Wilder’s  series has always been officially published as fiction although marketed as “true” with an “open” classification.  –  (think memoir?)      The books are based on Ingall’s memories which she hand- wrote on Big Chief tablets (and the backs of envelopes, etc.)  over a long period of time – starting when Wilder was about 44 years old and earning money writing columns for rural magazines.   She had started the project at some point just to write it down,  but after her daughter became a published author the idea these memories might be published as books was born.  –  And eight books later … Ingalls is an icon.

It seems there’s almost nothing actually invented,  rather Wilder (or Lane) edited a lot of her life OUT of the books.  There’s a significant amount of tragedy missing because her life was on the frontier and it was very difficult.  Too difficult perhaps for children’s books of the day.    Ingall’s childhood was not exactly one of little girls running through the sunflowers and jumping into the arms of the bare-chested Michael Landon.  So the true stories were edited and a couple of them got mixed around as to chronology.
Did that matter when, in 1893,  the Census Bureau had declared the frontier closed?  By the 1930s folks were ready for a little nostalgia.

The surprise is that the books were more fact-based than I’d probably given them credit for,  although they are fiction,  good historical fiction for children.   In fact,  the first third or so of Fraser’s Prairie Fires reads like an adult version of the children’s books with more hard times,  less heroizing,  more history and digressions and less sentimentality.   It’s definitely a biography but I felt like I’d read it before.  lol

See Laura Ingalls Wilder at  https://en.wikipedia.org/wiki/Laura_Ingalls_Wilder  but PRAIRIE FIRES is far more detailed with impressive source notes and literary value.  Fraser did her homework and it shows.

That said,  at the time of publishing (and again in the following re-publishing)  it was pushed as being a “true” story by the publishers and by Rose as well as by Wilder herself.  It “felt” true to her – it just wasn’t the whole story.   It shaped a lot of what we consider to be our US heritage –

The real Laura Ingalls  and Alonzo Wilder married when she was 18 and they eventually had one surviving child,  a daughter named Rose Wilder.
See Rose Wilder Lane at:  https://en.wikipedia.org/wiki/Rose_Wilder_Lane

Part II limns the lives of both Rose and Laura,  with some emphasis on Laura,  after the start of Laura’s career in small town newspaper reporting.  She was still only 44 years old and she learned how to write with her own voice,  her own stories starting to pop into her columns which were fairly popular.

At a certain point in the book Lane becomes a focus almost equal to Wilder.   Fraser has much to say about her from her teen years on through her massive literary and political career on up to her death.  It’s a biography of Lane as much as it is of Wilder.

This was the era of Ida Tarbell and Upton Sinclair and muckraking –  Rose Wilder Lane turned out to be one of the leading proponents, along with Ayn Rand,  of the American libertarian movement which NOW means (the opposite of the progressives but in that day it didn’t really).

Rose was also a kind of Kitty Kelly of the day.   Her “autobiography” of Charlie Chaplin was challenged in court,  but she was defiant.  She also used Herbert Hoover, Henry Ford and Jack London.    Rose had no scruples about her work or selling it.   “Make any promise, no matter how misleading;  take every advantage in selling a commodity, whether a piece of property or a piece of writing.”     Basically she wrote unauthorized  “autobiographies of men she didn’t know.”    (Chapter 7).

In the 21st century it’s possible Rose might have been diagnosed as bi-polar.  If not, I’m sure she was certainly something else,  going on spending sprees and working sprees and entangled with her parents, perhaps to an unhealthy extent.  She blamed herself without insight according to Fraser,  but then wrote chirpy memoirs about her times in Europe or fictionalized stories about Ozark country.

As the tumultuous lives of the women go on,  Fraser interweaves the history of the US.  It seems that after the first couple books  Rose was used the same stories Laura wrote up first.    It was Laura’s material really,  but Rose approached it in a very different way – an adult and a political way.   Laura had her stories and had written professionally as a columnist for small town newspapers,  but Rose had the big city expertise.  It was a collaboration.

In many ways Fraser has kind of cast Rose as the emotionally disturbed one in the relationship and Laura as a more solid soul.

The book is not without faults – Laura might be too much the heroine with Rose the villain.    Early on Fraser admits Laura might have been a bit sharp-tongued,  stubborn and tight-fisted,  but it’s Rose who seems to get most of the blame for the mother-daughter difficulties.   Similarly, Lane and  Ingalls’ agent, Roger MacBride and Michael Landon are not shown in good light –  but maybe that’s the truth of it.