The Man Who Loved Children ~ by Christina Stead

Posted on November 18, 2017 by beckylindroos

About a year ago I read Christina Stead’s The Little Hotel (1973) and really appreciated it.  But I found out that her book,  The Man Who Loved Children,  was really Stead’s magnum opus, making the Time magazine “Best of All Time”  list  in 2010 and so it went on my wish list.   A few months ago one of my reading groups was nominating books for November and I suggested  The Man Who Loved Children.   Here I am.   Yes,  it’s a terrific book.  It’s powerful and difficult but it’s NOT for the faint-hearted. 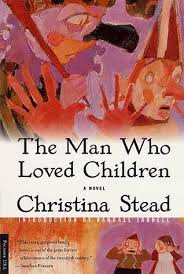 One interesting tidbit about the book is that it was written while Stead was still newly arrived in New York City and she was using her childhood in Sydney Australia as her inspiration.  Stead’s US publishers thought the setting should be American to attract American readers.   They had her go that way and she used some kind of fictional Washington DC area as the locale.

Well,  in some ways it doesn’t work so well,  the language and family just aren’t “American,”  they’re more like Australians.  It reminds me a bit of Peter Carey’s Illywacker or Tim Winton’s Cloudstreet (which I adore).  And the “American” locations don’t work all that well either.   But I’m well enough versed in Australian fiction – from Patrick White and  to Tim Winton  and even Christos Tsiokas and Bryce Courtenay – they all write about strange Australian families.

But on the other hand,  it’s very American considering Stead’s political views and the  e US of the 1930s – the Great Depression.  The time frame is probably 1928 through 1933.    And it’s about a family which is really unlucky and gets unendurably poor during the Great Depression.  The whole situation of that family is not too far afield from the way Stead grew up in Australia.   In fact,  it’s an exaggerated,  but pretty thinly disguised bio of  the author.

At the outset of the novel we have Sam Pollit, the eponymous main character,  who has a wife,  Henrietta who was from a very well-to-do family.  The children in the home include Louisa (Louie) who is about 11 at the outset,  from Sam’s prior marriage.  These three characters are the main pivots of the book – they’re full and complete characters come to life on the page as much as any of Faulkner’s.  Sam and Henny are deliberately created as complete and thorough opposites while Louie is in some kind of middle space struggling to keep peace between the two adults,  but she finds herself in the middle of a life and death between her parents as well for own personhood

In this struggle Louie is hampered by exaggerated feelings of worthlessness and ugliness and angst thanks in large part to the treatment of her parents who see her as fat, lazy, unattractive, bumbling, and foolish – essentially worthless.    For all her pathetic appearance,  she does have a friend or two at school and a teacher takes her under her wing.   She emotionally closer to her father,  but begins to see where he is her abusive and manipulative jailer more than her protector.

Filling out the cast are the four young boys, Ernie, Tommy, Sam and Saul,  and another girl, Evie which Henny and Sam had together plus an assortment of extended family members and friends.  These are sketched more generally but Ernie and Evie come through nicely.

How can this ever have a funny moment?  I don’t know how Stead did it but it does.  Maybe it’s from my familiarity with other fictional Australian dysfunctional families – maybe there is something comical about the way dad struts around and invents a language and so on.  He tries to keep everything light and he’s charming and it works.

They live in a shambly house along with Sam’s poor,  unmarried sister Bonnie who helps with chores.   The uppity Henny is not happy with any part of the arrangement –  she doesn’t like the children – (although I suspect she loves them) – and she loathes her sister-in-law.  She despises her husband.   She’s not a likable character at all.

Sam is sent to Malay as part of his job leaving Henny at home to manage the children.  Although Sam sends what he can,  they have little to no money,   There is a chapter devoted to Sam’s time in Malay where he shows himself to be a very loving although naive man.  When Sam returns home  the action continues with mostly mayhem and bad luck including the onset of the Great Depression.

Sam goes into some kind of bizarre denial about everything, all is well,  the kids are brilliant, the day is fun,  and he’s not helpful.  Henny gets worse after the new baby which was born just after Sam’s return (a “female problem?”) .

As Louie the bookworm tries to hold the family together she tries to be obedient and loving in the face of abuse from both parents.  Her step-mother treats her like a servant to be yelled at and called names while  her father generally puts her down by making fun of her although she is supposedly his favorite.

Family life goes on through several years when the main problem is there is no money.  Henny borrows and sells things,  Sam borrows and spends.   There are other dilemmas and problems such as school and troubled in-laws.

Themes –   Ah yes!   Poverty,  abuse,  families and dysfunction with secrets and infidelity and denial and economic stresses to the point of hysterics and talk of homicide and/or suicide sprinkled though the narrative.

Feminism is obvious in the 21st century but it wasn’t originally intended as such. Evie’s being raised to be a wife and other “roles” developed are not quite pointed – they were a part of life as folks knew it.  But Henny screams about the “rights of women,”  too.  (Stead was not pro “women’s lib” of the 1960s.)

The language in much of the book is often really hard to read or listen to what with invented rhymes and names and words,  but other times it’s pitch perfect for upscale US hip in the 1930s (as far as I know) and I suspect there are other places where it’s immaculately rendered – the South Pacific for one thing.  And that’s to say nothing of Louie’s writings.   The language –  the ways we don’t understand each other,  and the ways we do.  Stead is a master.

Another theme might be capitalism which has resulted in the mess of the Great Depression which is the direct but unstated cause of the family’s economic misfortune but the spending habits of  Sam and Henny are deeply problematical.

Symbolism, the deeper I got into the book the more I was aware of.  There’s the fish and the water to start with – and the treasures Sam brings back from Malay.   I think this book needs several readings to get a grip on all this.

On the downside it’s too long although I’d be hard-pressed to decide what parts to cut. The tension builds perfectly the way it is.

1 Response to The Man Who Loved Children ~ by Christina Stead