I love legal thrillers and although this doesn’t make it to the top of the heap,  Little Boy Lost is good – actually,  it’s very good.    I enjoyed the plot with the timely crimes and legal problems,   the carefully built characters and the nice writing.    I really wish this were the first book of a series but … 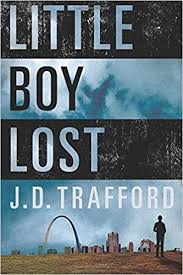 Justin Glass is a mixed-race attorney working in St. Louis where he and his family have lived for generations.  His father,  grandfather and brother all have strong political ties to the community,  but Justin wants no part of that world.  He just wants to succeed at raising his daughter alone while working as an honest attorney.  His wife died shortly prior to the book’s opening so he and his daughter are still grieving and she’s got some of her own problems.

The story opens when a  young girl from the neighborhood walks into Justin’s office to hire him to find her brother, Devon.  She is holding a jar of coins as payment.    Devon has now been missing for some time and the police won’t help at all.  It turns out there are a large number of missing black boys in St. Louis and a whole pile of corpses has just turned up in a back lot by the river.

At this point Justin needs Emma, his recently hired receptionist who is an immigrant from Bosnia.  She picked up the phone in his office one day and was hired.  A whiz at organizing the office and getting financial things going for Justin – Emma also has a whole load of cousins and uncles etc,  including Nicholas, a techie person,  who are willing to help with whatever is necessary for Emma to succeed.

One interesting thing about the book is that it covers contemporary issues quite well – the ingrown racial and economic issues of blacks as they have to deal with the justice department,  crime,  and education.  This is St. Louis,  MO  – only 21 miles from Ferguson.

All in all it makes for a good tale well told and with a great ending –  as I said,  I’m hoping for a sequel or a series.