The Hound of the Baskervilles ~ by Arthur Conan Doyle

Posted on October 8, 2017 by beckylindroos

I tried to read some Sherlock Holmes at about age 11 or so and only read a couple stories before I just settled for Nancy Drew and then Agatha Christie with the more recognizable world and a language which was more familiar.    Now,  having spent some time in the Victorian classics,  I’m trying Sherlock Holmes again and finding him … well …  nicely of the age with interesting mysteries and .  And very different from oh Harry Bosch (Michael Connelly)  or Travis McGee (John D. McDonald) – oh to say nothing of V.I. Warshawski.  lol 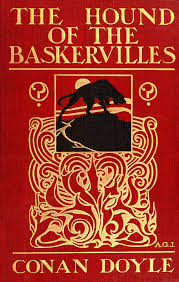 Not only does this take place in December,  but it’s one of those “dark and stormy night” books with a death and strange happenings out on the moors.

And the book prior to this one in the Sherlock Holmes series had Holmes being killed off by his nemesis Doctor Moriarity.  But due to the popularity of Holmes,  Doyle brought him back and wrote a couple more novels and many stories about him.

So –  The Hound of  the Baskervilles –   In London one Dr. James Mortimer goes to see Sherlock Holmes and his side-kick Dr. John Watson.  Holmes and Watson both think of themselves as scientists who use logic to solve the issues in which they are interested.

Mortimer presents them with the problem of his friend’s death by heart attack which he believes was by some other means.  He reveals his thinking.   But it’s science and reason against superstition which plays a huge part.

Holmes and Watson interrogate and visit the scene and do experiments to test ideas.   An application of logic is used and voila,   the mystery is solved.  There is only one thread and it’s told in linear sequence,  but some time is spent on descriptive material which creates a nice spooky atmosphere with a good amount of tension.   At a couple points Watson writes letters to Holmes explaining his thoughts and actions.   He feels like he’s in a really primitive world out in the rural parts – he writes of neanderthals.

Holmes tries to use the latest in scientific evidence – of the era.   He was assessing footprints and using phrenology (the study of head sizes which Doyle was in part pooh-poohing) and even the idea of detection was rather new at the time –  developed by the criminal-turned-cop Eugene-Francois Vidocq in the 18th century and took hold of the imaginations of both police and authors like Wilkie Collins, Poe,  Doyle,  etc.   The history of detection goes right along with who-done-it mysteries – police procedurals and amateur sleuths.

The Hound of  the Baskervilles,  like most of the Holmes stories,  is told from the 1st person point of view of his side-kick Watson and to consider there even might be the slightest shade of an unreliable narrator will get a reader way off the track.  I think Watson may be one of the most reliable 1st person narrators in all of literature.  That’s his job – heh.

Doyle writes better than I remembered – or maybe it’s just that I’m older.    The reader,  Grahame Stevens,  helps a lot although he reads a bit fast so it’s a good thing I had the book.