Posted on September 30, 2017 by beckylindroos

I got 2/3 of the way through the book and realized I wasn’t picking up on everything basically because I had expected fast-paced suspense as was hyped in the ads as well as displayed in the Prologue   But alas,  after that action packed Prologue,  the tension starts rather slowly and not until about the 1/2 way mark – maybe even further and it only picks up sporadically.

This is not a book of suspense, at all  – it’s a book of human relationships,  family, longing, missing people,  feelings with a little plot of hunting down a missing man as a kind of sideline.  But … it made several lists of best mysteries of 2017,  fwiw.   (Why?  Because it’s a lovely and well-written book with a little mystery in it?) 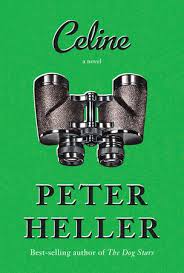 For lit lovers,  there is an overarching theme in the loss of family, especially of fathers, but also of mothers and children and siblings.   But when that high emotional content is coupled with a specific missing person crime crime case and a couple of aging detectives  the effect might spoil both genres.  The crime reader is going to get bored with the lovely descriptions and the insights in human nature while the reader of literary fiction is going to get irked by the action.   I love both and although I love a wonderfully well written novel with interesting metaphors and challenging themes plus engaging characters it doesn’t belong in the middle of what could be a rip-roaring suspense tale.

The hype for Celine intrigued me :

“From the best-selling author of The Dog Stars and The Painter, a luminous, masterful novel of suspense–the story of Celine, an elegant, aristocratic private eye who specializes in reuniting families, trying to make amends for a loss in her own past.”  –  https://www.penguinrandomhouse.com/books/545212/celine-by-peter-heller/9780451493897/

A kind of thriller hook is set up in the Prologue,  a standard technique these days. This time it happened long before the main events in the story.     Gabriela Ambrosio Lamont  first lost her mother Amana,  a young and beautiful Brazilian woman,  in a drowning accident when Gabriela was about 8 years old – in 1967 or so.   (If she was born in 1959 she’s now – in the 2002 setting   – 43 years old.    Ten years later,  her father Paul Lamont, a photographer for National Geographic and part time spy,   simply disappeared somewhere just outside of Yellowstone National Park.   Some more years later,  in 2002 to be exact,  and as an adult,  Gabriela  enlists Celine Watkins to help locate her father.

Things had happened in the 68-year old Celine’s life but she’s now married to Pete,  and has a son, Hank,  from a prior marriage.  She has a complicated history and now has many years sober  in Alcoholics Anonymous which is where she met Pete.   She and Gabriela are from the same upper class society and are both alumni of Sarah Lawrence.   An alumni newsletter is how Gabriela found her.

Most of the book is character development for Celine –  I really liked Celine,  I fell in love with Pete,  I admired Hank,  and I had a lot of sympathy for Gabriela.   I think my reactions were in line with the author’s intent.   But the story line – which is compelling in its own right – gets a bit lost with all the background stories.  Is this about the hunt for Gabriela’s father or is it about Celine’s own issues with absent parents?   –  Hard telling because the threads are so interwoven it interferes with the story.  In the middle of some action Celine is reminded of when her son Hank …   (sigh)

Back to the plot:   The official investigation determined that  Paul was eaten by a bear,  but the paperwork was completed very quickly so Gabriela has always been suspicious about it.   When Celine hears about it she’s suspicious, too.   It’s a case which is right up her alley.   The road trip starts in Chapter 6 –  Celine and Pete work out of an old camper named Benny while Hank does helpful research in New York,  along with his own little project. .  Pete is quite surprising in the background information he gathers on Paul and Gabriela.

The language is lush and careful,  especially when describing the western setting.  There are some really funny lines in the dialogue – Pete is a kick.

(Salvador Allende –  supposedly committed suicide but he was surrounded by military –  it was investigated and he did commit suicide –  imo – he made his explanation in the radio broadcast just prior.)