The Moviegoer ~ by Walker Percy

Posted on September 24, 2017 by beckylindroos

There is a LOT going on in this novel – mostly the angst and alienation of mid-20th century men,  but there’s also the old South of New Orleans,  Christianity (Catholicism),  movies,  women,  fishing,  making money,  Mardi Gras,  families,  mental and physical illness,  death,  etc.  Mostly it’s a search for identity by someone who refuses to be “identified”  or maybe who identifies with everybody/thing. 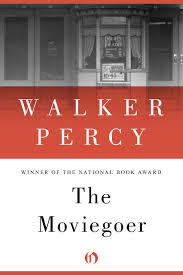 I read Percy’s book,  The Second Coming many years ago and wanted to read The Moviegoer ever since.   I was so engrossed this time I even took chapter notes.  Still,  I had to go back and reread those parts where I thought something had changed in the characters.

Basically this is the story of eight days in a young man’s life.  He’s an unmarried, and financially successful businessman and the days are those preceding Mardi Gras as well as his 30th birthday.     Jack (Binx) Bolling is on  “search”  for the reality of being human,  but at same time seems like he’s trying to avoid it.

Jack is our first-person hero,  a veteran of the Korean War with a war injury,  his father is deceased and his mother remarried and now has several more children.   Binx lives in one neighborhood of New Orleans while his Aunt Emily, her husband and Emily’s step-daughter Kate,  live in another, more fashionable section.  Binx is a nice guy – a gentleman of sorts,  of his own times, maybe.  But he is truly rootless and doesn’t know what he wants to be or to do.

He likes to go to movies quite a lot,  he turns his secretaries into lovers , and drives his little red sports car to the coast.  And he’s always thinking  –  he has a “search” going on.   His search is for meaning in what seems like a meaningless world.  Movies have more meaning – they’re more real.   And he’s looking for his authentic self – the real Binx Bolling, by using his detached observations.

The story opens over Mardi Gras time in New Orleans which is not a good setting in which to find reality but that’s really not the point although it adds to quite a lot of it.

His cousin-by-marriage,  the beautiful but seriously insecure (or depressed or whatever)  Kate Cutrer, needs some real help.   Her step-mother, Aunt Emily,  wants Binx to at least take an interest – perhaps marry Kate.   The two are birds of a feather in some ways – both are bright and beautiful,  rebels against the traditions of the place and times,  and both somewhat screwed up.  Binx can talk to Kate and she’ll listen (usually).  She is under a doctor’s care for her condition.

Binx is escaping emotional connections by observing rather than interacting with his environment – he lives aways away from his family and has serial secretaries.  He lives in a boarding house and tends to use public transportation in town.  He can certainly afford his own home considering he’s making $30,000 in about 1960. (And what cost $30,000 in 1958 would cost $246,981.92  in 2016.  But he’s rootless – has no religion,  no political persuasion,  no career he’s proud of (he sells stocks and bonds).  He likes making money but doesn’t feel it’s terribly “meaningful.”

He is attached to the sounds and smells and people of New Orleans and protests greatly when his uncle sends him to Chicago during Carnival.   He’s has problems with virtually every other part of his identity.

Kate has been depressed since her fiancé died several years prior.  She’s now engaged to a nice enough guy named Walter,  but it’s not doing her much good.

Binx also has a step-brother named Lonnie who is very ill.  It seems as though the only people Binx really interacts with are Kate and Lonnie.

Binx has two alternatives – one,  the very material Southern tradition of his Aunt Emily,   or two,  the Catholicism of his mother.    Percy was a converted Catholic as well as an existentialist –

When I first read the ending from the vantage point of a cynical 21st century reader I thought – “Yeah,  how long will that last?”   Reading the book from the pov of Walker Percy I think a happy ending is what is intended.

1 Response to The Moviegoer ~ by Walker Percy