My Name is Lucy Barton ~ by Elizabeth Strout

Lucy Barton, our first person protagonist, is having some medical complications from an appendectomy and is in the hospital for several weeks.  She misses her husband and daughters,  but during this time her mother travels from Amgash, Illinois to see her and stay with her in the hospital.  For five days the two women just sit quietly or they reminisce or gossip and bond in a way they’ve never done before.   The reminiscing is not about their own lives,  but about the lives of people they knew.   Lucy’s childhood home was quite desolate and because she was bright and determined,  she left,  got out  via college,  moved to New York and a career as a writer.  The story is from the vantage point of many years after the events. 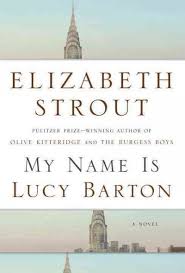 This is a story of families,  love, poverty,  fear,  pride and the judgmental nature of people all tangled up.   In the wonderfully well written over-arching story as well as in  the vignettes Strout packs a powerful punch about judgmental attitudes and love.

Lucy Barton was raised in severe poverty plus serious emotional pain and abuse.   The attitudes of neighbors, classmates and even parents were very judgmental and based primarily on the family’s poverty.   They become very isolated,  and although she marries and has children,  Since childhood Lucy  has found people to love in unlikely places.

Lucy loves her mother very much but it seems not to be reciprocated in an inhibited way.    Still the two bond in a rather awkward way in Lucy’s hospital room.  And it all works –

2 Responses to My Name is Lucy Barton ~ by Elizabeth Strout