The Force ~ by Don Winslow

The hero is corrupt – specifically,  a New York City detective sergeant has gone bad -actually,  this is basically a really good cop who has gone very bad.  Winslow tells us the story of his fall and it’s gritty – very gritty –  as well as a page-turner.

I’ve been a fan of Winslow for years and read several of his early novels,  but was mesmerized by The Power of the Dog  and The Cartel.   I was expecting a lot from The Force and it was almost there. 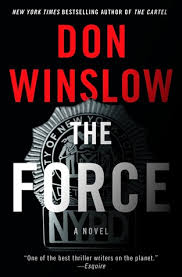 Denny Malone is a 3rd generation police officer  in New York City.  He thinks of himself as a good cop and he loves his family,  the city,  and  maybe most of all,  the elite Special Task Force which he heads.  But why do only the bad guys make money,  the stuff he and so many other officers need for their families.   He and the others o the force see it every day.  He and the force have opportunities in one form or another almost every day.

“How do you cross the line? Step by step.”

The book opens with Denny in jail and then we’re taken back to how it all happened.  It’s very fast -paced,  tension filled and,  as I said before,  gritty.  The desire for money,  legal or not,  is pervasive among the police, attorneys,  judges and others.  It starts out with the  sellers of heroin but spreads like an addiction.   Denny and “the force”  got deeply involved.

The story is told almost entirely from Denny’s point of view – almost to the point of stream of consciousness at times.  It occasionally gets a bit much to have him going on and on about the streets and his history but not often and it rarely interrupts the suspense.   Denny is wonderfully well drawn but the other characters are almost sketches.

The tension is what makes the book.  We know Denny is in jail from the prologue – the main story is how he got there –  who took him down,  what for,  who else got hurt,  etc.  And as the plot gets more complicated with more characters involved,  the suspense is ratcheted up.  What will Denny eventually do –  where it the bottom?  What motivates good cops going bad is the main idea/theme I suppose.  It works.

I enjoyed The Cartel much more.   It was more creative and the writing and story were better.   The Force seems like it’s been done before in some way,  the focus on violence and corruption in the NYPD seems almost gratuitous.

That said,  I’ll be waiting for Winslow’s next book – he is very prolific.