Sofia Papastergiadis is a very bright young woman trying to finish her PhD in anthropology, but who is stuck working at a coffee bar in London.   Mainly she has some family and personal issues.   For one thing she’s almost terminally attached to her mother Rose who has been divorced from her father for a long time.    Rose has apparently lost the use of her feet and she’s also very sensitive to many things including water. 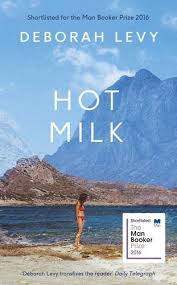 Sofia and Rose travel to Almaria on the Mediterranean coast of Spain to see a specialist,  but Doctor Gomez has some unusual ideas – he may actually be a quack and a rather dangerous one at that.  Rose is probably a hypochondriac, anyway,   blocking her own ability to live a full life and tying Sofia down to care for her.

Meanwhile,  Sofia’s father has lived in Athens for some time and has married a much younger woman.  Together they now have a new child.  This presents more problems with immature entanglement.

While they’re spending about a month in Spain Sophia  meets a few people at the beach between her mother’s appointments.  There’s Ingrid who is a kind of goddess and ____,   a young health care worker who rubs her back with ointment to soothe the jellyfish stings,  there’s a horse trainer and a masseuse.  And there’s Ingrid’s boyfriend.   There’s also a cafe owner and his dog Pablo.

There are a myriad of themes running through this wonderfully well-written novel.  There’s freedom and love and entrapment to start –  fraud and self-delusion.   I suppose those are the major themes Levy explores as she maneuvers her characters into various combinations while the first-person Sofie works on becoming more “bold”  and take risks.  Sofia is hugely sympathetic – at least to me – she’s smart and funny and sweet,  but really kind of pathetic.