I probably would never have read this book had it not been for the fact it was an All-Nonfiction group selection.   And I would have missed a bunch but it’s not up to the hype of the movie.    Like probably most Americans,  I had no idea that black women were instrumental in the space race – or any women for that matter,  at least until later.   I knew women were important as “computers”  in the development of computer technology from The Information by James Gleick – there are maybe two sentences in his book –  but not specifically black women anywhere (that I remember). 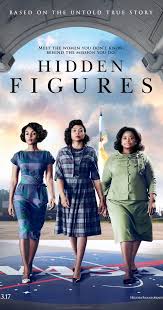 As probably most culturally aware folks  know by now,  this book was made into a movie as well as into a young adult book.   The film got highest honors and reviews and it occurs to me the book might be pretty blah next to the movie.

Apparently the film producers invented a few scenes for the sake of drama and visual effects,   but overall it’s said to be historically accurate.  It’s probably better organized and leaves out a bunch of socio-racial  information as well as the complex material about Langley administration.

“The film shows the three women as close pals, but their personal successes were spread out of over decades, and the book doesn’t present the three like a buddy movie. Dorothy Vaughan was made a supervisor in 1949, and Mary Jackson became an engineer in 1958, well before the film timeline. “

The main subjects,  Dorothy Vaughan,  Katherine Johnson and Mary Jackson,  each came from different places in the South. Vaughan and Johnson were from West Virginia while Jackson was from Virginia.  But they were all mathematical whizzes from a very early age and after struggles with the educational system and early careers as school teachers, came to be employed by the NACA and NASA as mathematicians ultimately instrumental in the space race.

These main characters are pictured below.   In real life there were many more black women working in the labs than these three.  And they all faced pretty much the same difficulties.  Dorothy Vaughan was one of the very first and she was eventually promoted to the highest position possible for her skills. 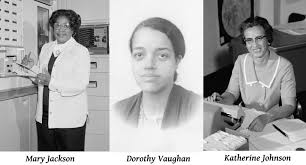 There are biographical sections on each woman and how she made her way from childhood prodigy  to the lab at Langley and what they did there. .  The book kind of rambles in disorganized fashion into the science and mathematics part as well as the administrative organization of Langley on top of the social issues of the times.  It talks about the segregation of bathrooms,  education,  restaurants,  etc and how that affected Langley.

Good stuff about the actors and facts: http://www.historyvshollywood.com/reelfaces/hidden-figures/

I was basically bored –  the idea was great and yes,  I very much wanted to know about this  in general,   I guess there was simply a bit too much about the personal lives and all the social issues accompanying the material.  I’m not the target audience – I know most of this already.   But!    I’m very glad it hit the movies with general historical accuracy because that’s probably the only way to get any information about or sense of  history through to people these days.

This link is about the whole group and how it was but a subset of the other female mathematicians:
https://en.wikipedia.org/wiki/West_Area_Computers

All three women (Vaughan, Johnson, and Jackson) worked at West Area Computers section of the Langley Research Center in some capacity and at some point.     It’s almost more about the feminist and race issues during the era than about these women.  I can’t find out if these women even knew each other –  one joined Langley in 1943,  the others in the mid-1950s.  There were many other black women working there at the time.