This is an “older” collection of stories written by Alice Munro, the “contemporary Chekov of Canada”  (per Margaret Atwood),  or of the world,  some might say since she won the  2013 Nobel Prize in Literature for that very thing.

Munro is so great  –  it seems like she writes whole novels in 40 pages.   She may be a bit regional sometimes,   but that’s okay with me –   as I was reading along I realized that Alice Munro is to western Ontario what Flannery O’Connor is to Georgia.  Maybe what Faulkner was to Mississippi or Wharton was to New York. 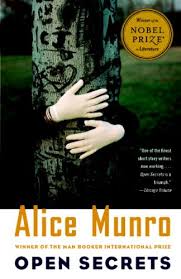 There are 8 stories in this volume of 295 pages.  That means they have an average of 37 or so pages each.  Per the great Wiki, “short stories” are under 7500 words.   Figuring it out as best I can,  Munro’s stories are about 15,000 words each which would make them more like novellas.  But  look at “novellas” on that same Wikipedia page and note they are supposedly between 20,000 and 40,000 words in length.  So bottom line,  these are slightly under normal novella length but longer than traditional short stories.   The word for that is Novellette but that’s a rarely used term except in old science fiction.   I generally think of a novella as being about 100 or so pages.

Also,  short stories usually have one plot thread and fewer characters.  Novelettes are usually thought of as somewhat lighter in tone.   Munro is different,  but she is SO good at it.

I suppose the connecting themes in “Open Secrets” are that people love, people leave,  people talk or write or they don’t,  life goes on (time).   The main characters are without family ties.   It’s like the characters themselves are “open secrets” because they have no one with whom to share.

Munro’s characters are usually a bit strange,  out of sync, “gothic” comes to mind but that’s not quite it.  They’re poor and

“Carried Away”
This is the story of a young woman, orphaned,  goes to a town and becomes the librarian.  She is alone in a small town who falls in love with a guy serving in Europe during WWI.  He comes home and there are complications with the romance,  but she stays on in town although it’s not her original town.   A lot of time goes by for a “short story.”    Claire has gone missing.

“A Real Life”
After Albert died his sister Dorrie was alone in the old farm house.  She was strange and it suited her.   Muriel never did get married although she looked hard enough.    Millicent was  married to Porter for a long time but it wasn’t really happy.   Dorrie is a kick – she certainly does not use proper language – neither does Muriel.  Dorrie (and Muriel?) move.    (Does Dorrie go missing? – who?)

“The Albanian Virgin”
Two intertwined stories – two very different women cross paths for awhile.  One is a refugee from Albania – the other is a refugee from her husband.   Charlotte (Lottar) tells Claire her story of being a prisoner and a refugee and Claire is telling us,  but Claire’s story gets in there, too.  She is alone.   Accents?   Both have moved – Charlotte quite a lot,   Claire from western Ontario to Victoria.    (“father” goes missing)

“Open Secrets” –
A little girl who is a recent foster child of someone goes missing from camp and everyone looks for her.  Maureen can understand her disabled husband pretty well except when he uses foul language.   He seems to point to a car –

“The Jack Randa Hotel”
Gail “Massie” leaves her Fiji because her husband left her and her friend is dying.   She goes Australia to where husband is with his new “wife”  and rents her own apartment.   Accidents happen,  complications arise – another old man who has had a stroke – language issues.  She imagines a speech.  Gail moves twice. Letters.   (Boy goes missing.)

“A Wilderness Station”
Simon Herron, a very young man and his younger brother George are orphans and homesteading a new area.  Simon gets Anne,  a very young woman from a nearby orphan home,  to marry him.   Simon dies on the way back to the homestead after the wedding leaving Annie and George alone.  George is taken in by neighbors,  but Annie refuses all help and finally leaves the area finding shelter in a neighboring town jail.   Letters and writing between ministers trying to help.   Time passes.  The woman who takes Anne back is also alone in the world although she has her family of origin – independent is the word for her – (difference?)

“Spaceships Have Landed”
Nineteen-year old Eunie Morgan has disappeared, – The only child of older parents she’s always gone her own way and been highly inventive.   Eunie’s father works at Doud’s.   She is kind of friends with Rhea who is friends with  Billy Doud (of the Douds also in Chapters 1,  2,  4 and 8).

Rhea and Billy go to Monk’s,  the bootlegger’s house/bar.  Eunie got a job at the factory and Rhea at the shoe store.  now grown up,  about age 22,  Billy gets boots at the store where Rhea works.  Eunie and Rhea are still in school.

Billy and Rhea start dating.   Billy has had girls (including Claire of Chapter 3?)  and a young woman named Lucille is Wayne’s date.  Now it’s Rhea but she feels banished from something when he plays cards.   But this night,  the night Eunie disappeared,  Rhea had gone to Monk’s without Lucille and ended up with Wayne.

These young people all feel somewhat alone in dangerous situations although they all have parents and siblings and friend except for Eunie whose parents are so old,  no siblings and no real friends.  She seems especially alone. She’s a walking “open secret.”    A lot of time passes in the space of only 35 pages and the changes are mentioned.  Language comes into play in drunken speech.  E,

“Vandals”
Opens with Bea Doud writing to her friend, Liza.   Bea’s companion, Ladner, is dead and following a dream sequence the story goes back through their relationship.  These two are both alone but they have indulged in serial relationships – Bea is very much a fashion  lady and has some money (from the old piano factory) and Ladner is an outdoorsman with some acreage.

Language,  speaking, books,  lots of signs.   “Liza directed Warren with light blows of her hand on his leg to a back road full as a bed,  and finally hit him hard to stop him.”

Liza gets a phone call from Bea who is out of town with Ladner who is having surgery.  Bea gave money to Liza for college but her father is gone somewhere and she has no one except her husband,  Warren.  She’s a Christian and thinks she should quit working at the gov’t liquor store but they need the money  –  married only a year.