I’ve been a fan of Amos Oz for a long time, but only read A Tale of Love and Darkness,  Scenes From Village Life, and perhaps some essays. 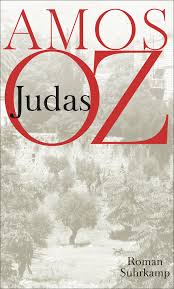 Shmuel Ash is a young man of socialist leanings who after dropping out of school as a graduate student heading for a PhD, and having been dumped by his girlfriend,  has chosen to continue to study the Jewish reaction to Jesus.   His job is to  keep Mr Vault company and do a few odd jobs. He’s somewhat asthmatic, naive and intelligent.

Gershom Wald is Ash’s landlord and employer as well as teacher.  He’s an old man who mostly wants to talk about ideas.

Atalia Abravanel is Vault’s housekeeper.  She is middle-aged, 40-something,  beautiful and absolutely in charge of Vault.   She instructs Ash and the whole set-up seems a bit spooky at first.  She is the daughter of a Jewish intellectual/ politico  Shealtiel Abravanel (fictional) who was dismissed by David Ben-Gurion.  This sets up a part of the action.

Ash studies and he and Vault have debates.  Oz lets us in on the backgrounds as well as the discussions and ideas.   The Roman historian Josephus is referenced for his views on Jesus (about 12 lines) and Christians, possibly added later.

There are several books and old revolutionary items in Shmuel’s attic room – Castro and Guevara and others including the Israeli fighters in the war of Independence – other spooky items.

Vault can be a bit bawdy – Shmuel has a personal history with a traitor, a Judas, in it but the guy was really a double-agent.

But the point is that Vault and apparently want to hide something from the world.  What is it?

Meanwhile it’s the mid-1950s in Jerusalem and the Cold War is heating up.  Eisenhower is issuing statements and Egypt is getting weapons from Russia.

There is discussion of a book criticizing The Polemic of Nester the Priest which was written by Nestor (a converted Jew)  in the 10th century.  https://en.wikipedia.org/wiki/Nestor_the_priest

And then the book hits the meat of it – who was Jesus and what do Jews think of that – throw the baby out with the bathwater or keep what is good – if they can find it.

Meanwhile Shmuel is becoming more and more attracted to Atalia – becomes more disturbed and thinks about leaving.   Vaults talks about about Jewish history and living in peace.

In Chapter 27 Shmuel asks questions which I guess he has no answers for but I’ll tell him about why the Jews did not accept Jesus at the time he was around –  the Jews of the higher church or the peasants – either one.  But those are minor questions among larger ones here –

The narrative switches back and forth between two threads – more or less.   There is  the current time with Shmuel having adventures in love, and listening to Vault’s tales and caring for him.   And then there’s the search for  old Jewish writings concerning Jesus and Christianity and Judas as well as some other related material intellectuals might think about.   The second thread is woven into the first but it feels like two threads.

The main plot line is what will happen to Shmuel  – will he stay in the house,  will Atalia fall in love with him,  will he go back to school,  and so on.  On the second thread the plot is more or less what will he find in these old documents –  who was/Judas? –  There is a theme running through both threads.  –

What were the arguments for and against the setting up of the state of Israel? Were there discussions about it at all? –

Was Atalia Abravanel’s father (fictional) a traitor?  What about Vault’s son who died in the war?  What value is independence – how important were the wars –  Vault is beside himself because the war that he espoused was the one his son died in.

Vault is angry that his son died and that anger spills over onto Shmuel – because Shmuel didn’t die in any war.   But he apparently supports the wars.  In 1948 the war was unavoidable – for the state of Israel to even exist war had to be fought.  Vault and Atalia and her father, Abravanel,  were not impressed by nationalism or statehood.  They were  naive? –  How could they call themselves Zionists?

Ben Gurion was the dreamer – who led them into war and eternal hatred.  And Atalia’s  husband,  Vault’s son,  Micah (?),  followed right along and died.

Abravanel and his side wanted to try to live side by side with the Palestinians rather than try to erect a single state.  And now the arabs live day by day with their defeat and the Jews live with their vengeance.   Both sides are self-righteous.

To go to a 2-party state at this point denies the sacrifice their heroes made in order to establish the state of Israel – and this was in 1958 or so!

Abravanel’s ideas are explored along with Judas’  – both “traitors” to a “cause,”  but both true believers in the divinity –  of Judaism (the people, the religion and NOT the state),   or Jesus (the divine,  NOT the dogma which sprang up).

So was the War of Independence in 1948

2 Responses to Judas ~ by Amos Oz