I got on a Joseph Finder kick since reading Vanished a few days ago.  (And it was on sale.)  It is older though and it shows – 15 years of progress in technology is a tell, imo, but the book is good enough I was able to get past that –  the fact that it’s part legal thriller helps.   lol –  and I know next to nothing about military justice system.

The premise:   Claire and Tom Chapman have been happily married for several years and they live with her young daughter from a prior relationship in Boston where she teaches law at Harvard and takes cases on her own from time to time.    The story is generally told from Claire’s vantage point although not in first person. 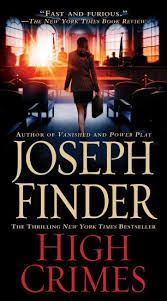 One day the small family is walking through a local mall after a nice meal when they are suddenly confronted by military police who want Tom because,  after he gets away in a blaze of a short chase – they tell Claire he’s not really Tom Chapman.  He’s Ron Kubik and he’s  wanted for murder.

Turns out this Ron Kubik is not wanted for just any old murder,  but for the assassination of 87 people in a remote village in San Salvador.   He is then accused of a couple other crimes based on the same incident  which happened 13 years prior, in 1985.      The police say he’s been in hiding ever since and they found him only because of careful cross checking of fingerprints taken from simple burglary.

Characters are good,  writing flows,  suspense builds of its own accord,  no alternating chapters,  no foreshadowing.    The background being the military justice system makes the book a bit twisty as well as more suspenseful and interesting.