The Book of Mirrors ~ by E.O. Chirovici

Memories are tricky things – especially after 20 years has passed.   But some things stick – some true,  some not –  some get placed in the wrong context.   This isn’t so much a “thriller” as it is a literary crime book,  more on the order of Julian Barnes mixed with Thomas Cook (Sandrine’s Case and others).  I say that because most of it concerns the theme of how memory is really unreliable.   Others have described the book as “a cross between Donna Tartt’s The Secret History and Carlos Ruiz Zafón’s The Shadow of the Wind.”   (The Guardian)  or  “in the vein of Night Film and Crooked Letter, Crooked Letter”  (Simon & Schuster) 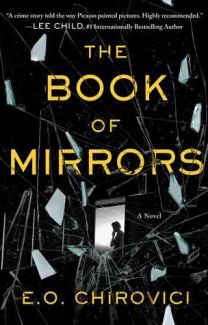 *******
The Book of Mirrors
by E.O. Chirovici  (Rumania/UK-English)
2017 / 288 pages
read by Jonathan Todd Ross and cast –
7h 5m
Rating:   A /  literary crime
*******
Peter Katz, a literary is intrigued by a partial manuscript he receives in the mail from one Richard Flynn who also sends an email cover-letter as a follow-up.   Flynn, who is now very sick,  was a student of the famous psychologist and professor,  Joseph Weider who was brutally murdered in 1987.  The case was never solved.   Now Flynn is writing about it – is he confessing?  Accusing?  Just giving an insider’s information which he has just remembered?   Hard telling because the next night Flynn died in his hospital bed.  The rest of the manuscript is nowhere to be found.

Katz is curious – he reads the excerpt and decides to have John Keller,  follow up and see what he can find in the way of the crime and/or the manuscript.  The idea is to write a True Crime book based on Keller’s investigation.

The theme concerns cognitive psychology and its relationship to memory,  mental stimulus and reaction – the way memories are formed and more.   And Weider’s thoughts on memory as well as his experiments are included in Flynn’s excerpt.   Weider’s research has included studies on how memory is sometimes erased,  scrambled, distorted and even invented.  Weider was also experimenting with his ideas and becoming very famous for it.

So that  little discussion sets up the complexity for when some of the characters mentioned,  an interesting bunch in themselves,   turn out to remember one way and other characters another way and some not at all.  The rest of Flynn’s  manuscript is missing along with a couple people and another manuscript.

It’s a goodie – Chirovici’s first in English,  his second language.