This has been read and reviewed highly rated and ranked for so long I just finally caved in.   It’s the memoir of a young brilliant neurosurgeon who discovered in 2013,  while still in his mid-thirties, that he had cancer and it was terminal – he had about a year to live.  So he wrote, a first love,  his memoirs. 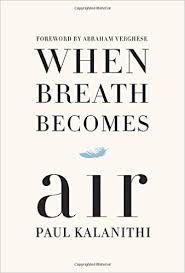 I think maybe the hype messed me up at first and I was expecting more than what was apparent in the first couple of chapters.  But then I got caught up in it and yes,  by the end I got teary and yes the book was also very thoughtful as well as illuminating.

It opens with the author having symptoms and finally talking about them and then getting a diagnosis.   Then the reader is taken into a kind of sweet memoir of his childhood and educational  experiences including studies in literature which were preempted by a call to take up medicine.   But the literature studies shine through.  This is by all means a literary memoir.

So then we get to travel with Kalanithi as he works at a 6-year residency program,  studies neurosurgery and survives the births and deaths of patients.  He starts to wonders if knowledge is enough because he becomes aware that the profession also demands moral clarity and wisdom.   “The grave digger with the forceps.”  And because he’s a Christian by birth (his mother converted from Sikh)  there’s a smattering of religious ideas scattered throughout – never heavy – just a presence because it was present in his life.

During this time he also marries a young woman named Lucy and she sticks it right out with him.  That’s the background – we get to know Paul as a human being and as a doctor.  The next part deals with Paul as a patient  –  a dying patient.

In spite of his diagnosis,  or maybe because of it,  Paul took to reading literature again,  and having a child with his wife.   And then he realizes that he’s not dead yet,  so he gets back to life as much as he can just going through the changes while he prepares for death.  The stages of grief and go on while he works at his chosen profession  – through shock and magical thinking and denial – each in its own time.

The thing is Paul intellectually knowledgable and aware of what was going on up to the end – he’d seen it in his own patients  – he’d counseled  them.   But on a personal level he searched for meaning while the doctor becomes the patient.  This is that story.

Kalanithi has a gift for words so the narrative is clear and informative but also quite literary in some ways – many ways.    To me this is a tale of rare courage and a willingness to live for meaning as long as was possible. Once again in the hospital, it became harder to breathe and  Paul declined as had been predicted.  Paul Kalanithi  finally died surrounded by family in March 2015.   He had been writing the book for the year prior to his death.

It’s a beautiful book – much more than I expected as it turns out,  and certainly more than most memoirs.     The Epilogue says the book,  as published,  was not entirely finished,  but it is,  in all ways,  complete,  because Paul Kalanithi lived *with* his cancer and he lived until he died.