Kitchens of the Great Midwest ~ by J. Ryan Stradal

Well,  how could I not read a book where the first chapter is entitled,  “Lutefisk”?   With both Audible and Kindle versions on my devices,  I started reading/listening.   Then I got really bored for some reason,  but I kept going because lutefisk is sacred food, dontcha know,  and I partake as often as possible – every year or couple years. 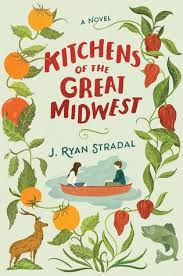 So out of a sense of love of family and all things Norsk,  I kept reading.  Then,  after the first chapter it took a turn for the better when Eva (age 11)  shows up.  And it gets better yet when Eva’s cousin Braque,  who is a college freshman intent on sports, gets the main character focus.    Very, very hot chili peppers play a huge part now –  this is an equal opportunity character list.   At this point I’m laughing and kind of caring about these strange young characters – wondering how they’ll get out of their predicaments.

There are a few recipes – not many – maybe a dozen (?).   It’s definitely a foodie book.   It’s well enough written for a fluffy type  book – but I may be prejudiced because of the lutefisk thing.  lol  And it may not be all that bad – it got a NY Times review (see below).

The book opens in about 1950 when the Thorvald family buys the lutefisk outlet in Detroit Lakes,  Minnesota.  After a chapter about how the three boys turn out the action switches to Lars grown up and relocated to the Twin Cities where he worked as a chef, married Cynthia and had a child,  Eva.

Then the story switches to the child, Eva Thorvald,  at age eleven.  That little bit covers to about page 35 so there are no real spoilers.   Eva takes after her parents in her love of food and she develops into quite an amazing woman with some interesting adventures.  But there are other points of view included such as those of her cousin Braque and  boyfriend, Will Prager.

The chapters are named for food items and there are usually even a few recipes included. And each chapter features a different character through whom we see Eva somewhere,  but not necessarily front and center.   The major characters are wonderfully well developed although not all necessarily “likable.”

It’s about love and food mostly,  and families,  mothers, fathers,  addictions, connections, a bit of feminism and growing up.  And there’s a bit of gentle satire in there,  too – sometimes poking at the city folks, other times at the more rural folks,  sometimes at younger people,  other times at the oldsters.   Because the whole story takes place over the course of about 25-30 years there’s a fair amount of change involved.

The book is just totally warm and funny and a nice respite from Sjon’s Moonstone or Judas by Amos Oz  and the crime books I’ve been reading.    I love walleye pike – love lutefisk and lefse and also always have jalepeños on my turkey sandwiches (and on Mexican food, too, fwiw).

Another thing is that the book is very tighly connected to the era of its times – For instance Neutral Milk Hotel was a band of the 1980s.  https://en.wikipedia.org/wiki/Neutral_Milk_Hotel
There are dozens of references like that.  But not everything – some references are totally fictional.

On the whole,  if you’re looking for something light and humorous but filled with lots of love (but no “romance” per se) –  go for it!   Oh –  and the ending is to die for.