A Proper Pursuit by Lynn Austin

I was really tired of unhappy books about genocide and refugees.  My mom was laughing and laughing about a book she was reading and was recommending to me.  Now,  I rarely if ever read anything recommended by my mother because her tastes run to the inspirational Christian lit – especially historical and light crime,  not romance.  But she had been going on about this  – was even going to order it for me so I caved and got an Audible version. 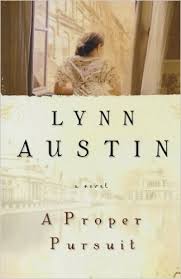 Okay – it is quite a bit more religious than I’m comfortable with,  (I’m not even a Christian, but I’m certainly not an atheist),  but that’s nowhere near the main plot of the story.  And overt religiosity is not always presented as an entirely desirable characteristic so I was, for the most part,  able to skim over those parts.   And then there’s the romance –  but that’s pretty humorous – fun.

It’s basically a pretty humorous book along the lines of Northanger Abbey by Jane Austen where a young woman is so enamored of reading gothic romance she imagines those situations going on in her life.   Here too,  our heroine’s perceptions are affected by her choice of romance reading,  but the entanglements are quite different from those of the Jane Austin’s book.

Told in first person by very courageous young Violet Hayes who, after graduating from finishing school in the spring of 1893,  is sent to her grandmother’s house in Chicago to find and appropriate husband.   There are also three aunts involved at grandmother’s house.    This is her father’s family. Violet has been raised without a mother and her family has not been honest with her but now her father is remarrying and Violet doesn’t like her new stepmother-to-be.    So, armed with new knowledge, she wants to look for her mother in Chicago and manages to stay a little longer than planned.  In doing that she finds herself with four very different suitors-  one is from back home and her father is pushing him.   In Chicago,  one man is rich and really only needs to marry to get stable for his father’s business,  one is a poor theological student who lives a life of good works.  And one is apparently a con artist with strange friends.

Meanwhile,  her matchmaking aunts are very different from each other.  One is society minded,  one is involved with charity including the Jane Addams settlement homes and the third is concerned with women’s suffrage and related issues.  There is fourth aunt who is afflicted with dementia and thinks her husband is fighting in Virginia in the Civil War.  And there’s grandmother who is very wise and loving,  but unable to be specifically very helpful.

But after awhile her father gets impatient and time is running out so Violet has to find her mother if she’s going to.  And her imagination works overtime while she pursues every possible lead,  even into the worst barrooms imaginable.

I suppose as far as secular themes go there might be something found in the ideas of love and deception.   Also,  I was pleasantly surprised by Austin’s skillful tension building – even if the outcome was fairly predictable  – I suppose that’s part of what makes it genre lit.

Historically the era is that of the Gilded Age and the story includes the conspicuous consumption of the very rich alongside the very poor working immigrants in filthy sweatshop conditions in the tenements.   It was also the era of the Chicago World’s Fair and women’s plight and their issues as well as suffrage coming to the fore.  The Great Chicago Fire of 1871 is remembered by one of the characters.  These events are pretty well woven into the lives of the characters as befitting good historical fiction.

Austin writes well enough, although there are an abundance of clichés, and she juggles these rather quirky characters masterfully while keeping the tone light and humorous through several plot threads.

Recommended only for readers who enjoy this genre,  but it’s pretty cute.