I’d been looking at this book for some time.  As those who have known or followed me for any length of time I have a couple of favorite nonfiction subjects –  the French Revolution, the history of Christianity and Native Americans.  It’s been awhile since I’ve read anything about the Native Americans and living in California for as long as I have (a LONG time) I wanted to know more. 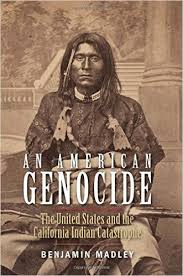 There is controversy about the use of the term genocide and it could never have been used prior to 1945 or so when some term was needed to describe the Holocaust of WWII.   But it happened prior to that – and not rarely.   Madley explains what he means and equates the words which were used in the 19th century (and 20th!)  in a very inclusive Introduction.   The words “exterminate” and “eliminate” come up in the primary source materials quite often.  That’s Madley’s point –  in terms of the UN Genocide Convention what happened to the natives in California fits.   And he shows that what happened here is a bit more extreme than what happened in the rest of the US.  It was a concerted effort on the part of the population and the government, both state and federal,  to remove the Indian presence.

The book is incredibly well researched,  well organized and nicely written.  But in its thoroughness it becomes tedious – killing, killing,  killing – page after page of massacres and body counts.

The chronology starts with the Spanish missions but moves briefly to the very short-lived Russian presence in the north,  then on to the Republic and finally to the Gold Rush, statehood and Indian removal.  But because there was nowhere much to move the Indians to,  they had to be killed.   So killed they were.   By state law they had no legal status – they couldn’t vote or testify in court,  couldn’t own land,  etc.

It was the population boom of the gold boom which stimulated the animosity and greed plus racism created the willingness to kill whatever stood in their way.  The newspapers often pushed them on – but not always.

Madley says the state established what he calls a “killing machine” which worked via militias which were state paid and then that was reimbursed by the US government.  It was the job of these “volunteers” (local ranchers and gold miners)  to handle the Indian problems.  And so they did.  And they got help from the US Army.

Chapter after chapter Madley details the many, many massacres of whole tribes,  annihilated because one cow was missing or one white man killed in revenge.  The reservations were very small and could not provide enough food for the tribes.  So a few Indians would wander off and steal a cow and that might be the end of their tribe.

There was also trafficking in Indians – when a mother and father were killed in a raid,  the children were stolen and sold as “indentured” or placed with “guardians” for several years.  (This continued for long after the Civil War ended.)

When the Spanish came it is estimated there were about 300,000 Indians in California.  By the start of the Gold Rush there were 150,000 and by 1873 there were about 30,000.  Today there are a couple dozen or more tiny reservations dotting the state -none in the top 50 of the US in size and one is the very smallest – at 1.3 acres, used as a cemetery.

In addition to a lengthy narrative,  Madley provides eight (8) appendices,  detailed Source Notes,  an organized Bibliography,  and an Index.  There are pictures and graphs.

An article by the author:
http://www.latimes.com/opinion/op-ed/la-oe-madley-california-genocide-20160522-snap-story.html