The Stranger in the Woods ~ by Michael Finkel

This caught my eye prior to publication and although I don’t buy pre-release,  it was ready for me when the date,  March 7, came.   I’d never heard of the North Pond Hermit of Albion,  Maine,  or at least I certainly have no memory of it.

Christopher Knight was finally arrested after spending 27+ years as a “hermit” living at a camp in central Maine.   He stole what he needed to live,  nothing else,  and had virtually no contact with people for that entire time.  Knight disappeared in 1986 and was captured in 2013 while committing a burglary.  Wow. 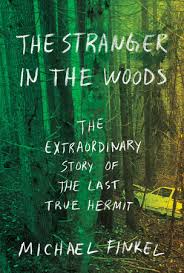 The memoir part is that of Finkle as he researches his subject.  The biography is that of Knight who grew up in rural Maine on a small family farm with four brothers and a sister, a father who worked at a creamery and a mother who grew vegetables and saved money.  They were all smart, honest, quiet and respected. They also read a lot, did well in school,  but also valued their privacy.

He lived in a very dirty looking make-shift camp which was in hearing distance of hikers and visitors.  He’d made the camp waterproof and as comfortable as possible with some amenities.  He read quite a lot.  In fact,  some of the book is like a bit of literary and cultural critique from Knight.  And he worried about his diet (as well he should! – lol)

And there are other digressions or maybe explorations would be a better word,  on the subjects of happiness,  mental illness (he wasn’t),  a broad range of other “hermits”  including those rarities in the animal kingdom,   etc. 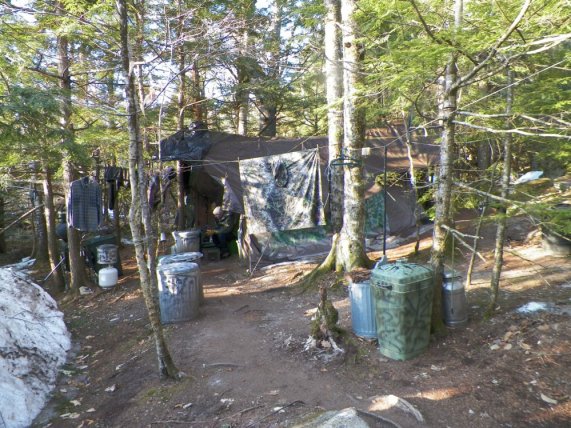 Between the ice cold of winter and the insects of summer,  Knight endured an extraordinary amount of discomfort.  There must have been a good pay-off – he must have benefited in some way from remaining outside of human society for so many years.   The boundaries of individuality and perception change as one spends time in real solitude.

Michael Finkel, an ex-journalist for the New York Times,   writes nicely and  although the material possibly could have been organized a bit better, the flow is nice.