Posted on February 28, 2017 by beckylindroos

Settling in on a mixed-weather Sunday to a cozy-ish mystery without a lot of graphic blood and gore and certainly no chases.   I say cozy-ish because the lead detective is not an amateur and the books take place in a small town.   Still – there is a bit of procedural in them.   This is not my first Louise Panny novel,  it’s just the first in the series as I might just decide to do all the books in order.  I read The Brutal Telling several years ago and wasn’t thrilled – I had a hard time with Ralph Cosham’s French accent and the whole thing seemed overly complex for such a simple story. 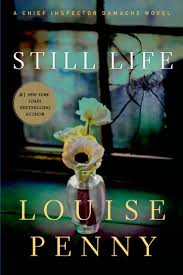 Oddly enough I have rread this before –  I noted it on Goodreads as September 2013 and gave it 4 stars.   But why could I not find it in my audio books? –

This time I was more interested and it’s a good story with interesting characters – Cosham’s accent was not an issue although his voice is grating on my ears.   Still – I may listen to another one (although I may not) and the series is never going to be a favorite.  (I like some cozies – just not this one particularly – I the main issue is Cosham’s voice – and maybe I’ll get used to it –  that happens.
Setting – a small community called Three Pines,  situated a few miles south of Montreal and a few miles north of the US.   The neighbors are of various kinds appealing to the readers –  artists,  bistro and B&B owners,  gays, a black woman,  several older ladies and a few couples.

A map of Three Pines:
http://www.easterntownships.org/touristRoute/12/three-pines-inspirations-map-louise-penny

It’s nicely enough written and never escapes the crime genre – perhaps Penny knew her limits or her readership.    That said,  the book is full of literary quotes, but they did nothing to impress me – seemed a bit phony while trying to add interest.  The focus was on the crime and the personalities necessary to convolute and then solve it.