The relationship between girlfriends and their parents, especially their mothers, has been written about before most recently by Elena Ferrante in her Neapolitan Quartet.  Smith’s volume pales by comparison,  but perhaps that’s not fair.  Sad to say,  it also pales against her own novel,  On Beauty (2005).

That said,  Swing Time is okay -not quite as good as White Teeth.  I’d compare it to NW (2012) but it’s better than  Autograph Man (my opinion only, of course). 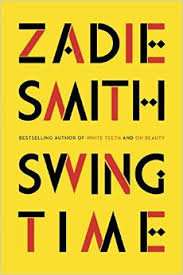 The story is about two mixed-race girls raised in neighboring estates of London who met at dance class and continued their friendship for years.  Their families are complete opposites with the protagonist’s mother being politically aware college student who is not particularly involved in mothering.   Tracey’s mother has lower class values and wonders why she can’t get disability payments.  Still,  because Tracey is naturally talented,  she enrolls her in dance classes where she excels.  The girls themselves are also quite different with the protagonist seeming to simply follow along as Tracy gets involved in risky trouble-making behavior.  The protagonist does well enough in school and loves Fred Astaire and old music,  Tracey has a harder time with academics and loves the newest pop music.  The protagonist’s mother disapproves of Tracey and her mother.

As time goes on the two grow apart with the 1st person narrator going to college and eventually to work for Aimee,  a music star  (the opening),  while her friend Tracey tries to become a dance star.  The fathers are important although Tracey’s black father is absent while the white father of the narrator battles with her mother.  The girls end up having very different lives but run across each other at various dramatic times through their lives.

Even though the protagonist is a weak little thing, following other women (her mother, Tracey and Aimee) and  reporting on others,   the characters are the best part of the novel. The narrator’s mother is a wonderful addition and she’s pretty complete by the end of the novel.  Tracey’s mother is good but less important and the fathers of the girls are very nicely drawn even in their own little shadowy spaces.

Another important character in the novel is Aimee, a super-star with riches and power and strings and charisma.  Between Aimee and Tracey our heroine never does quite find herself until she dances in Gambia.

The Gambian scenes are almost delicious with their rather exotic characters, Lamin the teacher and Hawa the young woman who loves her place.

Major themes therefore revolve around race,  love, family,  identity, betrayal, the desires of daughters and the expectations of mothers vs the love of fathers,  feminism, rebellion, the perils of stardom and money.  The similarities and differences between Gambia and London.   Music is a motiff – and Smith tried to insert it in weird ways “He stood there in 5th position.”   (sigh)  It wasn’t really that much about music although it was a nice touch.

The story is told in two alternating threads- one relates to the narrator’s life as she grows up in London and develops into a woman.   The other thread shows her activities as that woman,  an employee of a music star, Aimee,  and a visitor to Africa (specifically Gambia but that’s never said – only obvious.)  There’s something of Madonna in this Aimee character –

There is a lot of boring material here – I dozed off, I skimmed,  I had to go back and review,  etc.   It just bogs down in setting the stage during eras of English life I’m not familiar enough with – (although those times aren’t all that different from what was going on here).

There is so much that is like Ferrante’s brilliant The Neapolitan Trilogy I can’t go into it all.