I don’t really keep TBR piles for the last few years but I’ve had this on my shelf (in Kindle library) for months since I got it on sale.  I’ve never had time until now.  Erdrich is one of my favorite women authors in part perhaps because she’s Native American and has ties to the northern North Dakota Turtle Mountain reservation.  But she’s also a go-to author because some of her books are simply exquisite reading – (Go for Love Medicine (1984) which I’ve read multiple times but there are other books in that non-chronological series as well as some stand-alones – I wrote a whole post about her books!) 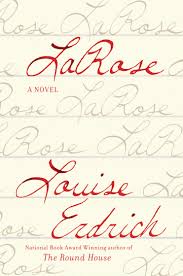 As with Round House (2012) and The Plague of Doves (2008) ,  LaRosetakes place on the reservation mainly in contemporary times.  The primay plot set-up is that while he’s hunting an Ojibwe man named  Landreaux accidentally shoots the young son of his neighbor.    The story then mostly revolves around how Landreaux sends LaRose, his own son, to take the place of Dusty, the shooting victim.  LaRose is  6  years old,  the same age as Dusty and his good friend.

Nobody is really happy with this situation,  not Landreaux certainly,  but neither are Peter and Nora Ravich, Dusty’s parents,  and Dusty’s mother, Emmaline, is devastated.    Maggie,  Dusty’s sister, is okay with it and LaRose’s siblings are supportive of their brother.  LaRose himself is certainly not happy.  It’s a windy story – sides are taken from the top to the bottom of the pecking order.   Is this permanent?  Or is it open to change?  And this is a huge part of the plot.

Meanwhile,  interspersed with the LaRose narrative are other much shorter stories.  One is a tale set in 1839 where a young Native girl is left by her mother at an Ojibwe trading post for Mackinnon, a white trader.   It’s a trade of sorts.   But Mackinnon also leaves the girl, who is about 11 years old and she’s then found by young Wolfred Roberts, another white man at the post.  This story was published in the New Yorker with the title, “The Flower.”  (2015).

Another interwoven story in the contemporary world is that of Father Travis, a conservative priest in a liberal community.  Everyone goes to see Father Travis.

Meanwhile Romeo Puyat is a thief and an alcoholic-addict who craves power has his own tale winding through the book.

The whole narrative is broken into many sections of varying lengths as it winds through all these generational stories taking place from 1836 to 2010.   There are Parts and chapters and even sub-chapters.    The Parts are divided by time frame with the first being called “Two Houses” and taking place in 1999-2000.   Part 2 is called “Take it All”  and backtracks to 1967-1970 for  start of the background story on a couple of the characters.  Part 3 is “Wolfred and LarRose” without dates but the story follows Part 2.    Part 4 is 1000 Kills” 2002-2003 and the final Part is “The Gathering” – also undated.   –   After the first introduction of the main characters the story-lines weave in and out through time frame Parts  to further a storyline or develop a character there.  It’s an intense book and the reader needs to pay attention.

This is very much a “show don’t tell” book.  We see how Landreaux, Nola, LaRoas, Romeo, and many others think and react – there’s not much of a narrator and it works to tell us anything more than what the characters do,  interpreting is up to the reader and it’s fascinating.

Erdrich loves genealogies – in fact that may really be a theme in her books – so many of her characters are related in different ways.  They know each other and their mothers knew each other.   Many of the characters are very well developed.

Many of the themes are the usual for Erdrich,  the historical issues of the Natives,   interwoven genealogies and the difficulties of the fathers are visited upon their descendants,  life on a small reservation or just outside its boundaries historically and today,  families,  and the continuing issues of health problems and addiction.    But love and grief are also huge themes here – and well done.

Lastly,  about Erdrich reading her own stuff for audio-books –  her voice is too soft.  It’s  more suitable for intimate readings in cozy bookshops than for trying to hear on your earbud over the din of the gym or traffic.  And it always sounds “sweet,”  not like the narrative.  Oh well – I think she’s getting better and I’ve got the Kindle version here too.

Brad Morrissey is mentioned towards the end of the book and there is a family clan of Morrisseys in “Love Medicine.”

7 Responses to LaRose by Louise Erdrich