Posted on November 30, 2016 by beckylindroos

I’ve read three  of Coben’s more  recent stand-alones,  but this is the first of a series – so I choose #16 right?  –  oh well … I was a little lost by a couple of the characters but for the most part the story gelled and was quite satisfying.   I might try some earlier books in the series. 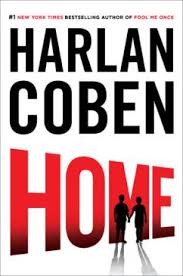 Ten years ago two 6-year old boys were kidnapped from their upper class homes and although every attempt was made to find them,  they’d disappeared.  Win Lockwood, Myron’s informal partner,   thinks he spots one of the boys in a London slum.   He alerts Myron Bolitar,  his good friend in New York who joins him  and together they work on the case first there and then back in the US – often Win is in London and Bolitar in New York.   Bolitar’s  secretary Esperanza helps with many details.

Anyway,   they get one of the boys back in the early chapters – or think they do – and the chase is on for the other one although that’s problematical.

There are elements of  deduction, scenes of violence and chase and even some moments of tenderness in this one.  Coben’s pretty good and I enjoyed Steven Weber’s narration. I,  like so many other fans apparently,  love the characters of Myron and Win and will likely try a few of the earlier novels.

2 Responses to Home by Harlan Coben