Bryant & May and the Burning Man by Christopher Fowler

Posted on November 16, 2016 by beckylindroos

I almost threw this one out but there’s something intriguing about it – I do wish I’d started with Book 1 in the Bryant & May series because one of the two elderly detectives is coming down with some kind of dementia and that would have been a whole lot mroe poignant had I really known him.  And I don’t know which of the Peculiar Crimes Unit is a regular and who is a story-line character. 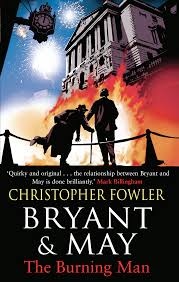 Anyway,  the plot is that the business district of  London is literally burning with an uprising resulting in large part from a corruption scandal.   There are many fires and a homeless man was  killed in the midst of it.. Then there is another murder involving fire but the victim was a part of the banking community.   There are either  murderous rioter or murderous bankers plus a couple of other side stories which have their own suspects.

There is a lot of padding about ancient England,  but I think that makes for a part of the enjoyment of the series,  not peculiar to this novel alone.   Unfortunately,  what with the aging characters blathering  and digressing all the expected tension evaporates rather than gathers although the ending is rather explosive. .

That said,  the series might be better suited to a British readership,  it seems to have quite a lot of avid followers.