Posted on September 4, 2016 by beckylindroos 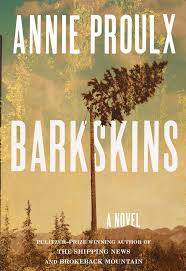 I suppose this is what I expected having read “The Shipping News”  years ago and very much enjoying it.   But Proulx is 80 now and not the most prolific writer on the block.   It’s a treat getting to read a new one.

The setting is basically the forests around southeastern Canada and Maine, especially the Penobscot and Boston areas and up into what is now Canada.  But there are also scenes in many other places because some of the characters travel  as far as London, Amsterdam, China and New Zealand and Ecuador.   The hundreds of characters include Natives,  immigrants,  colonists, Americans,  as well as a few Europeans and others.  Yes,  there are nice graphic family trees in the back pages but I really hesitated to look at them much for fear of accidental spoilers – like who marries whom?  I did check them out lightly a couple times though – they were helpful.

A saga like this requires much of the tale be related in “telling” rather than “showing”  mode,  but there is some nicely done “showing” involved as well.  And “telling” has its place when events transpire over the course of years and years.
The setting is small to start but widens as the years go by.   It’s infinitely more substantial than a “background”  as it is the forests themselves  which produce the actions and responses of the human characters.  The forests of the world may be a kind of setting as character? –  Can all those forests be “a” character – how about several or many characters?  I don’t know.  but in some ways decidedly yes,  in other ways definitely no.   lol –  They can certainly be discussed as though they were characters –
The story opens in 1693 in a forest upstream from a remote riverbank settlement in what is now the southeast corner of the Province of Quebec.   Two men, René Sel and Charles Duquet, start cutting the trees on a piece of land which their master,  Monsieur Trepagny, has purchased from the Mi’kmaqs.  A woman named Mari tends a cottage there and watches her several French-named children.   So begins the fortunes and misfortunes of two families, that of  Rene Sel (who marries Mari) and Charles Duquet who returns to Europe for a woman with property.  One famiy is basically of Mi’kmaq heritage while the other is more French or Dutch,  perhaps English.

It’s a powerful tale and nicely told with the history being gently infused without ever taking over –  the details about the Mi’kmaq people is perfect.  Proulx certainly does her research.    Unfortunately,  imo,   toward the end of this 700+ pages book,  the politics of conservation/environmental issues becomes a bit heavy-handed –  I’m certainly of similar mind but not crazy about being hit over the head with the details.

These pages are full of pictures and other details re Mi’kmaq life:
https://en.wikipedia.org/wiki/Mi%27kmaq

2 Responses to Barkskins by Annie Proulx