First off,  although I rather enjoyed it,  I wouldn’t recommend this book to anyone I know (maybe one person if the time an place were right) but … oh well.    The thing is I enjoy time-travel books to see how the authors work with the idea.  I don’t for one real minute believe it’s possible,  but it’s kind of fun to think about on different levels or in different aspects.    This book is actually,  in large part, “about” the time travel itself. 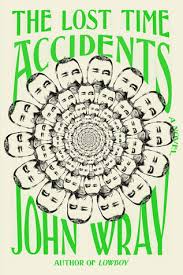 Haunted by a failed love affair and the darkest of family secrets, Waldemar ‘Waldy’ Tolliver wakes one morning to discover that he has been exiled from the flow of time. The world continues to turn, and Waldy is desperate to find his way back-a journey that forces him to reckon not only with the betrayal at the heart of his doomed romance but also the legacy of his great-grandfather’s fatal pursuit of the hidden nature of time itself.

Walter Tompkins is writing to Mrs Havens in contemporary time and in the letter spins off into the tale of his great-grandfather,  then his grandfather and great uncle all of whom were amateur physicist exploring the nature of time, the 4th dimension, and something called the “lost time accidents.”

I actually quite enjoyed quite a number of the characters – not all of them.  Some of them are very cleverly named.  (This book really needs a glossary of names or a little family tree or something-  I hope this is right:

**Orson Card Tolliver -son of Kaspar and Ilsa (K’s 2nd wife) – father of Walter – author of many books and gathers a cult following and not too far distant from Orson Scott Card.

There are only a few time-travel books which do a very good job with the subject.  Stephen King’s contribution, 11/22/1963 was interesting and all of Connie Willis’ are good. Most of the others simply skim over the time travel itself and tell their story from there.

In TLTA the Möbius strip approach to time was new to me and curious. Also new to me was the idea of confusing someone with a backwards/forwards motion (a car orbiting a second car with both cars in motion – what does this feel like to the passenger of the second car? – Ottarkar again? )

Another thing: – I loved the satire on new-age pseudo-science cults/beliefs. Too funny. And the author did have some fair humor in his style –

The “Lost Time Accidents” at the industrial plant. – lol!

Enzian was smiling her private smile now, the one she used only with her father and Genny. ‘Where do all those theories go, that Occam shaves away? How many tasty tidbits are we missing?’”

Finally, the ending was so satisfying – I didn’t really expect it, couldn’t figure out how in the world Wray was going to wind this up. But he did it, I should have seen it, perhaps from the beginning. lol

Anyway – not one of my best-of-year books but entertaining and it might stay with me for awhile.

4 Responses to The Lost Time Accidents by John Wray