A Gentleman in Moscow by Amor Towles

It glows – it radiates and shimmers and shines.  Amor Towles’ new historical novel,  A Gentleman in Moscow,  is so many things but basically a hotel-window view of Russia  from the time of their civil war following the Bolshevik Revolution,  through unification under the USSR,  through the long harsh era of Stalin,  and on into the middle of the Cold War. 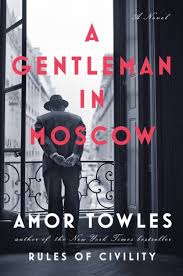 *******
A Gentleman in Moscow
by Amor Towles
coming September 2016 / 446 pages
rating: 9.5/historical fiction (Russia)
*
Published by Viking   (and a huge thanks to them and to Netgalley for the advance copy of this book.

On the “what’s it about”  level,  the life of an aristocrat,  a “Former Person,”   in Moscow has to be lived within confines of the world famous Hotel Metropol where his good fortune is to have been confined indefinitely under “house arrest” rather than executed or sent to the icy north.  Over the course of several decades the history of Russia and the internal dynamics of a great international hotel are interwoven with his personal life – the life of an honorable, intelligent,  loving and gracious gentleman.

As the book opens,  it’s 1922 and his “Excellency,” the twenty-something Count Alexander Ilyich Rostov, has returned to Moscow following a self-imposed exile in Paris. He has come back to reclaim some family heirlooms,  but finds himself confined,  by merciful court order,  to the upper floors of the Metropol Hotel.  His court sentencing also states that if he leaves the premises,  he dies.  Times have changed since the Count was last in Moscow four years prior, during the Revolution,  and the times will continue to change over the next several decades.  And therein lies a theme and a wonderfully well-told tale.

The Count has managed to secrete a fair sized stash of gold coins so he’s not really hurting for money.  He graciously arranges his now smaller and far less accommodating rooms on the 5th floor of the hotel and then meets a precocious young girl named Nina, the daughter of a fellow guest,  who shows him the ins and outs of the hotel – and there are many and it’s great fun.    Then the Count is employed as a waiter at the hotel’s main restaurant, the Boyarski.   His expertise is invaluable as guidance on a good many things from international menus and wines to seating arrangements. He understands princesses and knows what “class” really is.    And the book abounds with amazing descriptions of food.

As the story progresses Russia goes through some changes,  and life inside the hotel and restaurant has to go with the flow of the Stalin and the Communist state,  but the change is probably less evident.

Nina grows up,  Stalin comes and goes,  America becomes important,  but the restaurant “Triumvirate,”  Emile the chef,  Andrey the maitre d’, and the Count as waiter work together and remain fast friends through a series of troubles.   I won’t give away more,  but I became completely involved,  transfixed may be a better word,  in the story of  The Gentleman from Moscow.

Towles tells his story with sustained and perfect pitch matching the character of the Count –  a dignified intelligence,  a splash of humor,  a garnish of elegance, a hint of suspense, a dollop of history,  and a full measure of sparkling love.

I was fascinated by the novel’s footnotes which at times work to nourish the reader’s desire for a bit more information,  or at other times may create an added splash of intimacy,  with a delightful but unnamed narrator “intruding”  once in awhile with his own sardonic little line or bit of information with which to enlighten the reader.

This is the kind of book which is a joy to cozy in with somewhere and have a nice long read,  truly savoring the setting,  delighting in the characters, re-reading chunks of smart and lovely prose.  Get it now and stash it for your next rainy weekend with some blini or dumplings and tea from an old samovar (or vodka after supper), or black bread and borscht might be good or a good bottle of wine. (Did I mention the food descriptions are great?)

“So while dueling may have begun as a response to high crimes—to treachery, treason, and adultery—by 1900 it had tiptoed down the stairs of reason, until they were being fought over the tilt of a hat, the duration of a glance, or the placement of a comma.” –  Book One  – 1922 / An Appointment

And the point of all this is that although everything seems to change,  some people are able to evolve with the times meet the challenges and circumstances and survive- this is the story of one man who did – while keeping the best of the old,  the friendships, the love,  the elegance.
*******

1 Response to A Gentleman in Moscow by Amor Towles