Quartet in Autumn by Barbara Pym

Another reread – this time of an old favorite author,  Barbara Pym,  who has a whole interesting life and her books are delightful and there’s even a fan club of sorts -The Barbara Pym society. 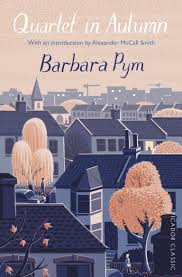 The setting of Pym’s near-classic  work is 1970s London and the story revolves around 4 employees in their own department of an unnamed company – maybe insurance?    The issue is that the four are apparently getting on in years, somewhat loners by nature,  and ready for retirement,  yet they are all essentially alone in the world.

They each have their own ways and are rather set in them –  they never visit each other outside of the office and for instance,  they don’t share lunches and  although they all use the library, they go individually and for their own purposes.   These are not “typical” people,  they’re loners by nature and as a result they “fall through the cracks” (as a couple of them mention during the course of the novel.)

Change is a huge theme here.  Changes in society including within the church and the church’s place in society,  race and language,  as well as in their individual situations and even their own bodies.  Yes,  life has changed quite a lot since these four,  who are now at or close to retirement age, were young,  before WWI.  And life and society keep changing – the mail girl is young and black!

Edwin Braithwaite, a widower with a daughter in Beckenham,  checks the clerical directory at the library. He is far more attached to his local parish and the church calendar its activities govern his life.

Norman, always a bachelor, has his solitary ways,  visiting the museum or the library (to see mummified crocodiles. )  when he can or the husband of his late sister on special occasions.   He lives alone in his “bedsitter” and is apparently very frugal. No particular religious connection.

“Miss” Marcia Ivory,  never married,  lives in a rather large house, alone since her old cat as well as her mother died. She occasionally uses the library to dispose of unlikely trash. Now the social service worker seems to think she needs looking in on.  Marcia recently had an operation which “removed” something – a mastectomy?   She does have some rather peculiar habits (hoarding and bird-like eating) and tends to be reclusive although she certainly pays attention to  her operating doctor. No particular religious connection – Protestant.  – Marsha is actually rather disappointed when a man gets up after a fall and she enjoys seeing the effects of an auto wreck.

“Miss” Letty Crowe , who also has never married,  has set her retirement date although that’s rather subtle.  She’s  never married .  She uses the library to check out novels.   At the book’s opening, Letty lives in a rooming house which has a new owner,  an African minister whose religion is more raucous than what she is used to. She has a widowed friend who lives in the country.   She really needs to move.   No particular religious connection.

(SEE NOTES for more on the individual characters)

These are four delicious characters for a reader willing to work a bit to distinguish the subtle variations in each of the scenarios presented.

Although only one of the four  is actively attached to a church,  religion/church seems to play a fairly large role in the novel as a whole – in the background three of these people don’t really want,  and likely will not be,  getting assistance from the church.  Furthermore, except for Edwin only Norman might find it acceptable – because it could possibly save him some money or provide a safety net.

Their mortality haunts them as they read articles in the newspaper or see incidents in their lives.  Norman especially is concerned about “falling through the net of the welfare state,”  being found “dead by starvation,”  or even being unable to open a can of food.  He buys fresh and doesn’t stockpile like Marsha.

(SEE NOTES for more specific plot points –  spoilers there though)

3 Responses to Quartet in Autumn by Barbara Pym