Posted on April 6, 2016 by beckylindroos

This story, the second in the Catherine and Liam series by Ronald Bolson,  opens with a guy making a very slick exit from the US via the Chicago airport.  The next thing we know some lawyers of an upscale investment company are searching for a lost bank transaction – lots of money – $88 million dollars worth of lost money.  And then our man from Chapter 1 turns up in Hawaii.

Jack Sommers has had a pretty rough few years – first his beloved wife,  Elena, the daughter of Palestinians from Hebron, died suddenly and then his in-laws sued for custody of Sophie, their 6-year old child.  Jack won the case but the grandparents stole the child. 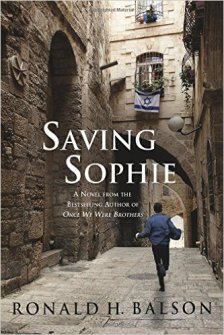 Now Sophie is in Hebron going to school wearing a hijab and missing her father.  She lives with her grandfather, Dr. Arif al-Zahani, who teaches Sophie about the Palestinian issues and is apparently involved with a group with some terrorist plans.  Meanwhile,  Sommers has a plan in mind which will get Sophie back.

The narrative flows between the scenarios – Sommers with a friend in Hawaii,  Sophie with grandparents in Hebron,  and the bankers with their investigation when along come Catherine Lockhart and her boyfriend Liam Taggart,  the detectives of the series.  And LIam gets the State Department involved via a woman named Kayla Cummings.

The backstory is lengthy with deep sympathy for Sommers and Sophie.  The bankers have their own agenda,  and then we find some Russians are involved (sigh but lol).

I think Balson is trying to educate his readers as well as entertain them because he includes a lot of historical information on the Jewish/Palestinian struggle – back to the times of Moses and the Cananites and a bit on the time from the influx of Russian Jews, to the  fall of the Ottoman Empire and WWI and yes of course,  even 9/11 (a mere mention).

I’ve read some Israeli history from the points of view of several Israeli authors and Balson has done a really admirable job of compressing it (albeit definitely slanted toward Israel).   Some of the plot threads are more human than they are political –  father daugher relationships,  romantic ties in times of terror,  etc.   But the historical and political aspects never take over, although it’s a close call sometimes.

There are plenty of twists and turns and more and more as the plot moves along – the tension builds very nicely.  The ending is the stuff of true page-turners.

If we understand Dr. Arif al-Zahanito be a serious nut-case,  a hurting and fundamentally radicalized element in a group of serious radicals,  then the presentation is okay.   We have nut cases in the fringes of politics in the US,  too.   But If he and his group of insiders are taken to be representative of Palestinians in Hebron (etc.) then it’s obiously not okay.   (I think Balson indicates several times that the doctor is allied with terrorists and not representative of anything.)

Balson writes nicely – this is an international thriller with some relationship sensitivies – not much real violence except towards the end there’s a bit more.

Highest compliment – I really want to read Balson’s first one – Once We Were Brothers – about a camp survivor and repercussions  from the Holocaust.