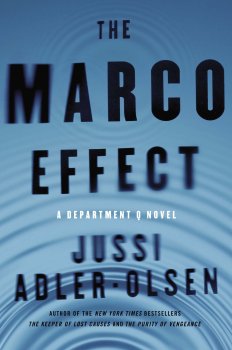 Finished this about a week ago and forgot to post!  Carl Mørck, a love-lorn middle-aged detective is in charge of the closed case section of the Copenhagen police department,  Dept. Q.    In this 5th book of the series, Carl and his assistants tackle a case in which a young gypsy boy named Marco Jameson holds the key to an old murder but Marco is very careful not to be found – not by the police and not by the gypsy “family” he has escaped from – finally lots of people are after Marco.

Mørck’s assistants are the same quirky characters which have followed him through the series.   Ammad is a brilliant detective but a rather strange man who says he’s from Syria and tells camel jokes and Rosa a smart and attractive but possibly schizophrenic young woman.   Between the three of them a lot of humor is woven into otherwise pretty grim novels. >>>>MORE>>>>

2 Responses to The Marco Effect