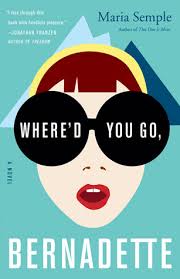 This is a very funny, hilarious (?),  and generally good-natured satire of contemporary society with emphasis on mental issues and support groups,  the nouveau riche, the tech industry and tech in general,  more – .  Semple’s  brush is broad.

Bernadette Fox is the brilliant but very strange wife of Elgin Branch, a Microsoft executive, and the mother to Bee , their precocious 14-year old student at a private school.  The very upper-middle class family now lives in Seattle,  but don’t  really “fit” with the attitudes of old Seattle people she meets through Bee’s school. Besides,  Bernadette doesn’t really get along with other people except her husband.  She is also a highly regarded architect who is in hiding from everyone except her husband and daughter.  >>>>MORE>>>>