The Wars of the Roses:

Posted on March 5, 2015 by beckylindroos 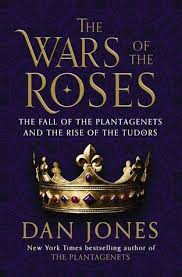 The Wars of the Roses: The Fall of the Plantagenets and the Rise of the Tudors
by Dan Jones
2014 / 416 pages
read by John Curless 15h 7m
rating 9 / history – England 15th century
(I both read and listened to this one)

Good book!   I was going to listen but about half way through the first chapter I realized I needed the maps and the genealogies available in the Kindle version – also  I like pictures.  🙂  So I listened and read along on the side.

This book starts where Jones’ The Plantagenets left off,  but there is no real need to read that one first.  This stands on it’s own. In fact, for me, The Wars of the Roses is more interesting than The Plantagenets.  The Wars of the Rosescovers a much shorter period of time so there aren’t so many names.  There is more emphasis on the personalities of some of the personalities – Henry VI,  Edward VI,  Margaret of Anjou,  Richard of York,  Warwick, others – many women are highlighted.  >>>>MORE>>>>