Posted on February 6, 2015 by beckylindroos 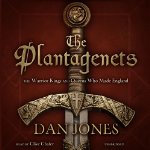 The Plantagenets: The Warrior Kings and Queens Who Made England
by Dan Jones
2012 / 580 pages
read by Clive Chafer/ 20h 49m
rating: 9 – history of England

“The prince was drunk.”   So begins Jones fast-paced, bloody  and insightful narrative of The Plantagenets ruled long and hard – joining and separating England and big chunks of France (Aquitaine, Maine, Normandy, Potoirs and Anjou) in addition to Scotland, Ireland and Wales. They also fought fiercely  amongst themselves and against others.  Some of the kings tried to model themselves and their reigns after the mythical King Arthur while others just went for the blood.  >>>>MORE>>>>