Colorless Tsukuru Tazaki and His Years of Pilgrimage

Posted on November 6, 2014 by beckylindroos 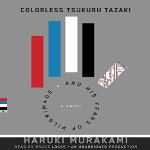 My old favorite authors have certainly been going for the gusto. David Mitchell, William Gibson and now Haruki Murakami have all released new books recently and all three of them have gone beyond what they’ve written before. Sad to say they went somewhat beyond my most enjoyable reading.