Posted on October 8, 2014 by beckylindroos 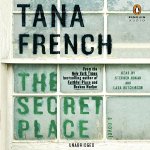 Another trashy crime novel – not too trashy (I just say that)  – very suspenseful.   A spell of relistening was necessary because  the accent is pretty stong and my attention was weak.  Second time it was very good and I enjoyed  the book.

There’s really a tad too much silly teenage girl angst, especially at first,  every other chapter is about the concerns of a small group of exceptionally close girlfriends who attend an elite girl’s school in Ireland.  This is the backstory of the relationship between the girls and their male friends at a nearby boy’s school.  It’s the lead up to the murder but
>>>>MORE>>>>