I’d never read Moon TIger and have wanted to for quite some time.   I’ve read several of Lively’s books,  The Road to Lichfield being the most recent but also Passing On and How It All Began.  I believe Moon Tiger is generally considered to be her best – it won the Booker Prize in 1987. 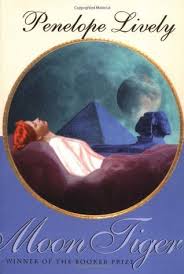 The sharp-tongued,  call-it-like-you-see-it 76-year old Claudia Hampton is dying.  She’s in a hospital and being kept as comfortable as possible.  She likes to imagine she is writing a history of the world and arranges her own life story within it.  But she keeps losing the words.

History killed her father,  or so she thinks. The Viking Prayer of Deliverance has deeply informed her own life as have a number of other historical events,  whether she lived them or their literature or a reproduction in dramatizations,  film, books or wherever.   This is like a meditation on history – what it is, what it isn’t.  How one dying woman sees it intertwined throughout her  life.

Claudia grew up with her brother,  Gordon,   a bit older than herself and with whom she was too close.   Theirs was a middle class home where education was important,  but later she married and separated from Jason, a film-maker who specializes in documentaries.  Meanwhile she studied and wrote history.  Together they had one daughter, Lisa,  whom Claudia  finds a tad too conventional.

But in the frame story Claudia lies in her bed remembering these things which always seem to feature history in some way,  while the nurses flutter and Lisa visits from time to time.

When Gordon marries Sylvia and they live in the US Claudia visits them and they tour the Plymouth Rock settlement attraction,  Sylvia is nice looking and dim but a good wife for Gordon. But Claudia is a successful writer of history books and that is a point not to be missed.

One theme in the book and in her life is war – wars figure prominently,  wars of the world in England back in the days of the Viking invasions and in Egypt during WWII.  Also in Mexico filming and in Hungary – when Russia moved in.

And another theme is love – many kinds in many places, for many people and not always for the right person or the right reasons.  Love in times of war or peace,  babies,  life and death juxtaposed.

So it’s about war and love together because also in her life is a young man named Tom during her time in WWII Egypt, and there’s a boy named Laszlo who comes when the Russians take Hungary.  They both love the empty places in Claudia in ways her family can’t quite find.   Gordon is there too – until he’s not.

The point of view changes regularly and often without warning which makes for a fascinating read because it’s very well done.  One minute we’re reading about how Claudia feels regarding religion and God.  She believes in God because “Who else could bugger things up so effectively?”  And the next minute we’re inside Lisa’s head where she’s thinking of  the lover she won’t tell her mother about because Claudia would not disapprove.

There are some slow parts or parts which felt like they were too long,  but in the end it all comes together just right –  beautiful.