Well, at least I can say I’ve read a P.G. Wodehouse now.  I doubt I’ll read another. 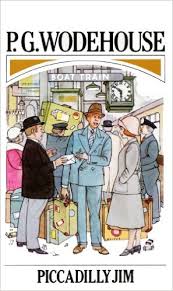 It’s basically a “zany madcap” (as we used to call them in the 1970s)  of a  romance which includes secret identities, kidnapping and some kind of explosive device.    Not my cuppa,  but there were a few times I really did laugh out loud.

The reason Mr Pett wants to kidnap his wife’s child is because he’s a fat,  lazy, insulant little snot.  Pett figures if he uses a method he read which was successful on dogs he can cure him – send him to a camp where he’s deprived of everything.

Meanwhile Ann Chester, Pett’s  niece,  has decided not to marry and really despises a clown she met named Jim Crocker.  Jim’s kind of like the step-son only an adult except that he got sick of himself and his immature ways and reformed.  So now he wants to meet the lovely woman he ran into at the station but finds out she loathes him.   So he pretends to be someone else.   There are other pretend identities and real kidnappers and so on.   It all gets a bit tiring.