News of the World by Paulette Jiles

Lots of hype about this book by Paulette Jiles who is normally thought of as a poet but has also written novels.  And the book  is different.  I’ve read so many “western”  books over the years and I thnk they’ve changed so much,   from Louis L’Amor to Larry McMurtry to  Patrick DeWitt and now Pauletter Jiles.  Even Nathanial Hawthorn’s Leatherstocking tales are Westerns of a sort – from a different era – a different West than we usually read about. 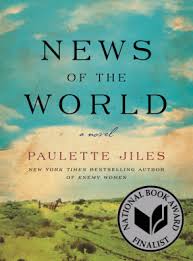 Anyway,  in this novel of post-Civil War Texas,  Captain Jefferson Kile Kidd, a 70-year old US military man who has fought in 3 wars,  is a self-employed traveling news reader.  He comes to a town,  sets up a forum and read to his paying audience from various national newspapers    His focus is on non-Texas matters.   As the story opens he’s just accepted the job of transporting a 10-year old girl from Wichita Falls back to her family near San Antonio, a journey of hundreds of miles through rough and lawless terrain.

Johanna, the name Kidd gave the captured girl, was held by Kiowa Indians from the age of about six and for the last 4 years has  lived with them as part of their tribe.  During that time she forgot everything she knew about western ways  including her name and the language,  how to wear shoes, bathe and how to use eating utensils.  But she’s bright and brave as well as stubborn.

As they travel the odd pair has adventures both  large and small. At first Johanna tries to run away back to her Kiowa family.  But she also slowly learns that the Captain is her friend and they bond.

Jiles is no stranger to novel-writing,  but she’s a poet at heart and the narrative shows it.  The descriptions of the Texas landscape come from the hands of a true wordsmith.  This is not a page-turning thriller, but it kept me up late last night until I finished – good ending!   I’ll be going on to read “Captured: A True Story of Abduction by Indians on the Texas Frontier”  by Scott Zesch which is recommended by Jiles to readers who are interested in the subject of children (any ethnicity)  kidnapped by Native tribes of the Southern Plaines.