Kyung Cho an immigrant Korean professor at the local university,  and his Irish social worker wife Gillian, along with their young son are trying to sell their home because they have become over-burdened by  payments and bills.  This has been their own doing by living beyond their means and trying to keep up with the lifestyle of Kyong’s parents,  Jin and Mae who live a few miles away.

One day they see Mae running stark naked across the streets to their house.  She’s been beaten and raped.  She tells them something about Kyung’s father and they get her to the hospital. 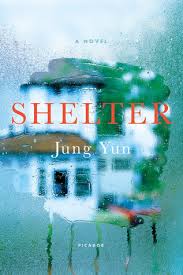 As the tale unfolds we find several clashes of  culture and of generations between the old Korean ways and the new young American ways,  between Korean and Irish ways,  between the 1960s and the 21st century.   There was physical abuse in Kyung’s childhood and he’s never forgiven either of his parents.

The plot in this one really twists – there were several times I was completely surprised by what happened.