In the Prologue (Kindle locations 292-294) Helm states her premise perfectly:

I understood now what this book should be: a biography of Ravensbrück beginning at the beginning and ending at the end, piecing the broken story back together again as best I could. The book would try to throw light on the Nazis’ crimes against women, showing, at the same time, how an understanding of what happened at the camp for women can illuminate the wider Nazi story. 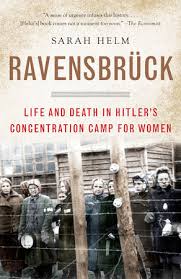 I say  perfectly because she does just exactly that – details as much as possible the life, from beginning to end,  of  the only  Nazi concentration camp specifically for women – Ravensbruck.

The narrative is chronological for the most part and a mix of dry and riveting – makes for  slow reading at first but picks up considerably in Part 2 ( out of 6).    I was more impressed by the descriptions of what was happening at the policy level than with life in the barrack although it is the life in the barracks part that makes this book different and really stand out.

It’s just that there’s so much brutality and pain and it’s quite a slog at times,  but absolutely necessary for the impact to be made.  There’s  loyalty and sacrifice and love amongst the prisoners as well as some treachery.  These were real women, not characters in a novel,  and they were 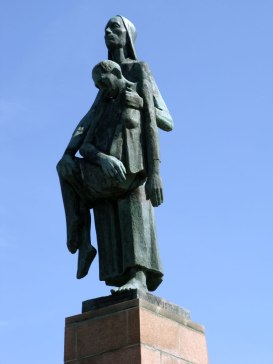 completely dehumanized and then treated like sick cattle or criminals.  There were Jews,  gentiles married to Jews,  prostitutes,  Marxists and Jehovah’s Witnesses along with gypsies and other “worthless mouths.”    I felt I owed it to them to listen – they told their tales in notes smuggled through and then in diaries and letters and finally in court documents. A few were even interviewed by the author.

I was surprised at the number of Jehovah’s
Witnesses assigned there and their brave determination not to bow in any way to Hitler or his war.   I knew some Jehovah’s Witnesses were rounded up although I never really knew why or how many –  I thought it was just a few but nope – there were several thousand.  Anyone who opposed Hitler in any way, including being handicapped by birth,  Jewish,  gypsy,  Marxist,  or a foreigner was vulnerable to the camps.  The  majority of women at Ravensbruck  were not  Jewish,  but were there for opposing Hitler in some way including being of the criminal element, prostitution and being “asocial” (lazy ).

Actually,  almost as many non-Jewish people died in the German camps as Jews: http://www.huffingtonpost.com/2015/01/27/holocaust-non-jewish-victims_n_6555604.html  This book seems to cover the variety and Helm seems to emphasize the nationalities of those interred – it’s quite interesting.

The heroines are one focus here – Elsa Krug,    Olga Benario, Helena Korewina,  Doris Maase, Hanna Sturm,  Kathe Rentmeister,  Krysia Czyz (!),   Yevgenia Klem, Zdenka Nedvedova, Maria Klyugman,  Zoya Savel’eva, Sylvia Salvesen,   Yevgenia Lazarevna, Valentina Makarova, and many, many other women did amazing things in order to survive or help their co-prisoners. They got messages to each other and to the outside,  they sabotaged the work effort,  brought extra food for some,  the doctor prisoners tried to help,  they comforted each other,  one told stories,  some sang.   The Russian women from Stalingrad were exceptional. 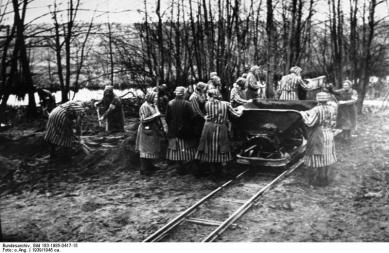 The other prisoners,  those with just a name,  are another focus – they were all victims,  even the guards who were often co-opted prisoners.

And there were specially evil people,  Himmler and some of his SS folks,  like Hoss, Karl Gebhardt, Percival Triete,  Fritz Suhren,  and others.   The truly sadistic Ludwig Ramdohr is singled out for special attention – hated even by many in the SS for his spies and mission to end corruption.

Sad to say yes,  some prisoners did succumb and turn informant – probably quite a few considering the torture.

At Ravensbruck the camp’s job increasingly became simply to provide for the German war effort – uniforms and arms.  The output was demanding – when the starved slave labor couldn’t keep up they were killed.   “As long as prisoners were fit for work they were to be kept alive.”  (loc 6397)

It would seem that there was no agreement among the general population to see it as  Hitler saw it –  to agree with what he was doing (if they knew).  They simply had to hush up about opposing him.  Without Hitler there would still have been a war,  but without Hitler there would never have been a Holocaust in part because the real 2nd in command creeps – Himmler,  Eichmann, Goring,  Goebbels would never have risen to such prominence – imo.

Of note –  a couple Nazi collaborating factories are mentioned notably  Siemens but there were many more.

The Red Cross of Germany apparently refused to do anything about the conditions in the camps.  They wouldn’t even tell the world – which they were mandated to do  – and they definitely did know what was going on.

The messages of Krysia Czyz via her family finally got connected to a Polish cell in Sweden who telegraphed a message to London.  Still,  no one did anything –  not the Red Cross, not the Vatican – word would get out but would not spread.

Toward the end there were 22 countries represented at Ravensbruck – as well as a very large number of yellow stars (Jews) – some protected because they were not from Germany.

The book is a biography of Ravensbruck and it’s long and it wears a person out just reading it.  The scope is from the inception to the how things are today –  the structure is used to focus on the women themselves and their lives within the camps and then out examine how this fit with Nazi strategy as a whole.   I would get quite tired of reading the horrors of the camp – sickened is perhaps a better word – and then it would change to what was happening in the world at large.   Virtually everything not personal and given more than a one-time mention  can be online but it’s the combination added to the personal issues unfolding at Ravensbruk which provides the impact.

QUOTES:
The sole aim of Hitler’s concentration camps in the early days was to crush all internal German opposition; only once this had been done would other objectives be pursued.

By 1936 not only was the political opposition entirely eliminated, but humanitarian bodies and the German churches were all toeing the line.

In 1936 500 German housewives carrying bibles and wearing neat white headscarves arrived at Moringen. The women, Jehovah’s Witnesses, had protested when their husbands were called up for the army. Hitler was the Antichrist, they said; God was the ruler on earth, not the Führer. Their husbands, and other male Jehovah’s Witnesses, were taken to Hitler’s newest camp, Buchenwald, where they suffered twenty-five lashes of a leather whip.

What the ICRC  (Red Cross) was trying to do: preserving ‘neutrality’ was so much more important. There may well have been those on the Committee who feared too that sending the parcels would offend Ernst Grawitz, head of the German Red Cross.