Aaaaahhhh….  a nice suspense-filled genre novel.   I’ve been reading some fairly intense fiction and nonfiction lately and I’m due to just settle in with a good tale well told.

Set in New York any day now it seems that “something has happened” to the entire electrical and internet grids. Unfortunately,  this happens in the middle of a huge snowstorm,  a recored-breaking blizzard. 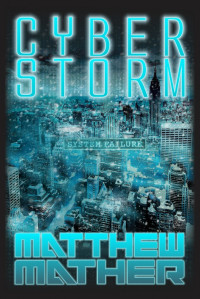 Mike and Laurel Mitchell are without power or communication along with everyone in their building and oops – New York City.  Actually,  it looks like huge sections of the whole country may be in a similar situation – and in China, too. But the group in the complex have each other to rely on and to be with,  because it’s dangerous out there and getting worse.

Mike, our first person narrator and a techie-type social-media  entrepreneur,  is a good friend of a fellow resident named Chuck Mumford who has been thinking and preparing for something like this. The two combine resources and make it through Christmas but then they run into some serious difficulties.  Chuck’s wife, Susie,  insists on sharing what they have with those who don’t –  not the best idea in New York in the midst of a panic because basic needs are not being met.  Mather spent some time developing these characters – there’s an incredible old Russian couple and a strange young man named Damon Indigo,  others.

The myriad of issues the group has as a result of the situation  are well thought out,  realistic and terrifying.  But there is an enormous amount of bravery, goodness and ingenuity here, too. The story is not entirely bleak – but it’s not pretty.

Mather has a solid background in technology and he writes nicely as well – (YAY!)   Mather knows exactly how to create tension without resorting to foreshadowing or a broken chronology.  Actually,  any foreshadowing here would diminish the suspense because it would imply that the characters survive.  So the reporting,  although it is past tense,  takes place immediately after it happens.

Another element in Mather’s book,  and it’s rather unusual for contemporary dystopian fiction,  the characters discuss some rather interesting ideas.  I’m really impressed – going to have to look into more of Mather’s novels.