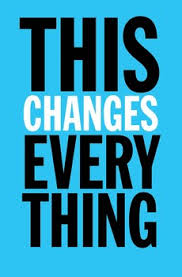 I don’t quite know what to think at this point – yes, of course I believe that climate change is for reals – and it’s going to make more and more trouble over the years.  Also,  I don’t think there’s anything we can really do about it- the system is self-perpetuating and climate change is completely woven into the fabric of capitalism and that’s all based on the acquisitive nature of mankind.

Now I suppose if things got bad enough we’d change our ways but most likely it would take the power  of a dictator to get the changes needed made.

This book is page after page , and hour after hour,  of the disastrous situation we’ve got ourselves and the world into.  In her defense,  Klein doesn’t spend a lot of time on things folks who are reading this book would know.  But when even the parts of the “green movement” are collaborating with the capitalists and the  fossil fuel industry then what hope is there?

If you want a blow-by-blow account of what Klein says see: http://www.resilience.org/stories/2014-12-28/heft-notes-naomi-klein-s-this-changes-everything

From that site – and I agree with the author’s less than enthusiastic response to Klein’s optimism:

… she focuses on an argument in favor of organizing a mass movement for climate action that fights for big changes in our economic system, representing a conflict between the reigning neoliberal ideology and an alternative worldview “embedded in interdependence rather than hyperindividualism, reciprocity rather than dominance, and cooperation rather than hierarchy.” She recommends a strategic alliance between climate activists and activists in the various movements for social justice, based on their common interests and the galvanizing effect of climate emergencies. She recognizes the great difficulties that a movement for climate action faces, but is hopeful that effective action can be forced before it becomes too late to avoid catastrophe.

So  – do I think there will be some kind of complete reversal in our thinking to the point we make growth a bad word and simple redistribution,  conservation and protectionism of what’s available now a priority?  Probably not – not as long as the Koch brothers and others (see Dark Money by Jane Meyer; 2015) have anything to say about it.

And not as long as there are so many poor people wanting to have an extra box of macaroni and cheese each month to feed their kids, or  just needing to drive an old battered car to work, and just wanting to get their kids a plastic pool for summer’s heat  – to say nothing of diapers, a television, sneakers for school.  Not as long as the rich want perfect lawns in drought-blight areas.  Plastic is not going away any time soon –

Klein’s ideas and goals are all wonderful – but the opposition has other ideas?  The truly rich and powerful fuel-moguls and corporations have anonymous dark-money pits for propaganda and to get their guys elected and technology resources to thwart the “tree-huggers.”   I suspect they will use them – they’re not playing games.  These are the climate change deniers.

I read this book very slowly because it’s loaded with detail and a tad boring although very sincere. (The narrator actually sounds almost whiney with sincerity.)

It changes capitalism and materialism – extractiveism.  The real truth is that climate change is not just another issue to worry about – it’s about fires and droughts and extinctions which tells us we need a new economic model and that we to evolve.

From market capitalism to some reformist policies so the carbon numbers can move in the right directions.  Basic income for all,  rewriting trade law,  new regulations about resource extraction,

Polite incremental change is not going to work – it’s actually been disastrous.  We need drastic action from the bottom.

There’s nothing really new here – not if you were convinced of global warming a long time ago and see that instead of making progress we’re actually getting further and further behind because of very wealthy pro-fossil fuel interests.  The problem is old news.

Klein’s only positive suggestion is pretty much limited to stop taking fossil fuels out of the ground now and start a complete return to small agriculture- based economies.

Bottom line – yes,  I have to go with it because there is no other solution – even if this one doesn’t work it might have a seed of something for future use – for after the climate crashes.