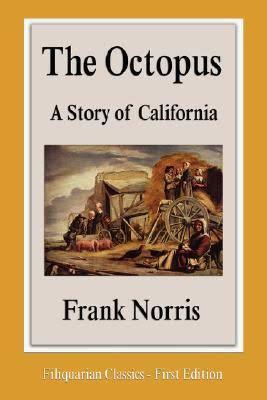 I’ve wanted to read this for a long time because the historical situation unfolded about 50 miles from where I live and it still gets some play in the news once in a great while.

Back in  1880 the Southern Pacific and other companies used their land grants from the US government to build railroads  from Oregon to Los Angeles.  The railroads got an enormous amount of land in a checkerboard layout (this happened throughout the US)  with farmers buying the alternating sections.  The deal was that when the tracks were in the railroads were to sell the extra acreage to the farmers at a very reasonable rate.

That’s not exactly what happened in this case though.  Instead of charging what the railroad and early farmers had paid, the railroads now charged upward of ten times the understood amount and if they didn’t get it the railroad foreclosed, removing the farmers to the road and putting their own guys on the land.

In Hanford,  near Tulare California,  this was hotly debated and one day when the Marshall came to enforce a foreclosure a number of men from the farmer’s league went to the indicated house and a shootout transpired leaving seven farmers and the marshall dead.  Only the farmers remaining were charged and jailed.  They became heroes in the area and in the press nationally.

From Wiki: https://en.wikipedia.org/wiki/Mussel_Slough_Tragedy (and there’s more there)
“The exact history of the incident has been the source of some disagreement, largely because popular anti-railroad sentiment in the 1880s made the incident to be a clear example of corrupt and cold-blooded corporate greed. Muckraking journalists and anti-railroad activists glorified the settlers and used the events as evidence and justification for their anti-corporate crusades.[2]”

** This is excellent with photos and the state of research on the Mussel Slough story today – I think it’s pretty accurate:
http://www.fresnobee.com/news/special-reports/article27686851.html

This is more sympathetic to the farmers – more anti-corporation:
http://www.sfgate.com/business/article/Railroad-s-Past-Tainted-By-Mussel-Slough-Battle-2975168.php

This is from my home-town paper in 2000:
http://www.recorderonline.com/porterville-history-the-railroad-and-john-j-doyle/article_fdbd25c3-e664-58a0-a667-5a5be9fe43aa.html
(These folks tried to change the train serving the community – ha!)

**
Norris’ book is very good,  exciting.  He did fictionalize it in several ways but that happens.   The naturalist style is evident in the sweating of the men in the fields, the natural growth of the wheat, the heavy use of details.