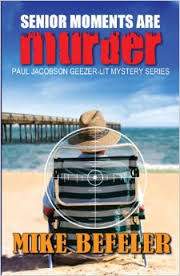 This is the third novel in the Geezer-lit series by Mike Befeler.  They’re kind of fun, silly, and I’ve read the first two so …

Paul Jacobson is about 84 years old and beset with short-term memory loss.  He’s quite bright during the day but his memory resets at night.  As a result at the opening of Senior Moments Are Murder,  he has no idea who his fiancé Marion, is.   But this doesn’t seem to bother him too much – although it is somewhat disconcerting.

Then he goes for a walk and finds a dead body and can’t remember who where he is or how he got there for the detective.  Bad news.

One aggravating thing about these books is that Jacobson uses phrases like “the old broad”  and other seriously dated phrases.   I suppose it’s to make him believably old but in 1st person and 3rd book,  it’s become irritating.