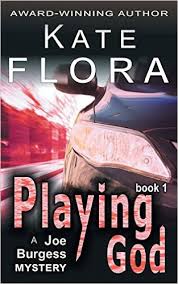 I’m really not sure how I feel about this book – It’s certainly not an auspicious beginning for the new year!

Although it’s told in  3rd person, much of it is from the point of view of a a male detective and it’s not believable.  There’s a lot of sex in the book – I suppose Flora talked to detectives to get some kind of input on how they talk about women in their bantering but as far as I  know,  having 3 brothers and reading a lot, that’s not how it goes unless there’s one instigator.  Is that Joe Burgess? – Not good.  – The sex talk places really interrupts the tension.  Note that the author has a female name.   Too much sex gets really boring – it rarely advances the plot unless it’s a romance –  I wasn’t aware that the Joe Burgess mysteries were romance novels (heh).

The setting is Portland, Maine,  but that has no bearing on anything.  It could be any medium-sized city where it snows.

The plot is good – quite good.   A doctor is found murdered in a really gruesome manner apparently by a prostitute who was servicing him in his car – the finale of an ugly little secret life the doctor has going.  And one twist is there were two women doing the honors which, meanwhile, were being filmed by a third (or fourth) party.  These are described in fairly graphic detail.

The handsome,  arrogant and very dead Doctor Steven Pleasant was not a nice guy and there are lots of people who would like revenge for the way he treated their loved ones on death beds as well as business partners who were worried for their reputations.  And it seems like Pleasant needed money, too,  what with an ex-wife and child plus a new family.  Then there are the father of the doctor’s second wife – he’s raging.

Finally, it feels like the author tried a bit too hard on the the main character of Detective Joe Burgess, “the meanest cop in Portland.”   He’s got the standard old case haunting him but he’s just not believable – he’s too good with the women to have managed bachelorhood through middle-age.

Okay – so on the good side we have a twisty plot, and some pretty good  writing.  It’s quite  funny in places (but it’s to the point I’m not sure whether or not to take the book seriously or not -and I think it’s meant to be taken very seriously).

One of the better aspects of the book is the character of Alana,  the black prostitute, who was with the victim.  She is a kick but Flora took it a bit too far – as usual from the other characters.

All this combines to be an A for the good stuff and a D for the excess content.  Averaged out that makes a B- or a C+.  I guess I’ll go with the C+. And I really don’t think I’ll be reading more of this author.