Called the “Marcel Proust of our time”,he won the 2014 Nobel Prize in Literature “for the art of memory with which he has evoked with the most ungraspable human destinies and uncovered the life-world of the occupation”.
http://en.wikipedia.org/wiki/Patrick_Modiano

This collection of three novellas is based on the life of the author and took me a long time to read because it’s slow and melancholic to start with,  but also because I want to really “get into” it,  understand it,  feel the history of it, appreciate the ambiance.   But Proust took me a long time, too.   Like À la recherche du temps perdu,  the stories  all have to do with the author’s personal theme of memory and identity – fictionalized autobiographies.

Each of these novellas has a whiff of mystery along with the nostalgia and the endings are inconclusive.  But I understand  this is typical of Modiano’s writing and it fits with the whole.  I’ll be glad to read more.

** In Afterimage,  we have the Paris and people of the German Occupation (1940-1944)  as photographed by one Frances Janson and as told by the unnamed narrator (Patrick?) who collects Janson’s photos.  Janson has left the country and I think the narrator is looking for his essence, maybe the essence of the Occupation,  via his photography.

That narrator is now a 50-year old man in 1992 and he’s relating how he met the photographer Frances Jansen in 1964 and offered to catalogue the photos.  The narrator was 19 years old at the time,  Jansen was 44.   Jansen keeps his photographs a-jumble in 3 suitcases – he uses a Rolleiflex camera

and he disappears frequently,  avoids people.  One photo is of himself with a girlfriend,  another is of a woman named Colette. There’s a certain sense of mystery in the idea of “What happened to these people?”

I’m reminded a bit of  two other books I read not so long ago.   One is Lovers at the Chameleon Club by Francine Prose because of the setting in occupied Paris and a photographer with WWII connections.   And the other book I’m reminded of is The Savage Detectives by Roberto Bolaño because of  the disappearance of the Mexican writer.  The style is similar in some way to that of Orhan Pamuk in his memoir/travelogue Istanbul but the subject of memories  possibly lends itself to that.

Modiano writes wonderfully and the translation works beautifully to develop the mood of  melancholic eroticism and a yearning for a Paris that no longer is.  (I think that’s what it does.)

** The eponymous story Suspended Sentences has the narrator remembering his life at about 10 years old (1955?) and living, along with his brother,  in the home in a  Paris suburb belonging to relatives who have (or had) some kind of connection to some kind of  the Paris underworld and money – are associated with people who had been with the “Rue Laureston gang,” a pro-German operation.  But what does a little kid know and where are his parents?

There are lots of nicknames,  Snow White,  Patoche, Little Hèléne as well as some historical characters – Roger Vincent,  Albert Modiano,    The mystery here is the other people of the house and area – who were they, where did they get their money, why did they visit, and why did the police never question the children?  Who was Eliot Salter de Caussade, the marquis who had lived in the large, now abandoned, chateau next door and about whom the boys fantasize elaborately?

The story moves back and forth through time, from the 1955 to 1965 and then more recently.   There is no real frame except perhaps arbitrarily the most contemporary one – “where is this being written from?”   The 1955 scenes predominate.

In the 1965 era the narrator (now officially Patrick)  is in Paris writing his first novel and meets one of the friends from the “old days.”   There is a bit more about this friend – connection with a murder,  time in jail – it started about the time they knew each other prior.

Also in 1965,  looking for his father who was arrested during the Occupation for being a Jew in a public place after 8 P.M.  He was released,  but Patrick has questions – mysteries – how did his Jewish father escape?  Many friends in the Renaissance as well as the Occupation forces. 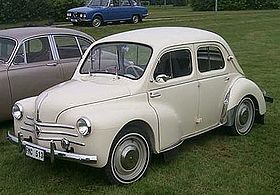 This story seems to focus on cars for some reason – the family car which was a “4CV” (Renault),  Vincent’s big American car, a convertible,  a car with a radio,  colorful bumper cars, a Jaguar,  several cars in the garage,  Simca autos, and of course there are garages,  some in tact, some destroyed, with possibly interesting histories, because where do people hide?  Perhaps the idea of the cars is what would strike a 10-year old boy?  Perhaps the cars are a sign to the reader of the socio-economic status of the owner be it high, low, flashy, American, etc.

** Flowers of Ruin  shows Paris as a totally charming but mysterious and shadowy character,  holding secrets,  growing and changing with time and ultimately staying much the same.

The story starts out in the 1990s with Patrick walking through the old areas, naming each street and turn and finally landing at Rue des Fossés-Saint-Jacques where back in  1933,  “a young married couple commits suicide for no apparent reason.”   He hasn’t been in his old neighborhood since the 1960s. 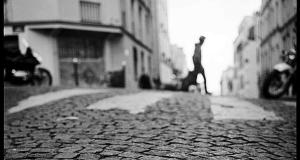 But he decides to investigate and finds out that one Monsieur Urbain T and his wife Giséle each shot themselves in the heart. Giséle lived long enough to mention two women and a red elevator.  The police had investigated back then with no resolution.  Now Patrick is following the couple’s footsteps of that night and remembering when he lived there.

The memory of this case has haunted him – the old Paris haunts him. So in 1992 he  continues to follow the leads of the 1933 suicide and we read newspaper clippings about the case.   Flowers of Ruin is chock full of street names, towns, businesses, even phone numbers  – like a massive physical description of a beloved character which is all of Paris since the Occupation, it’s streets and tunnels and rivers and shops and colleges and churches and trains and apartments and cafes – even the people.   I’ll bet this is a kick to those who really know Paris.